The Many Uses of Pearls 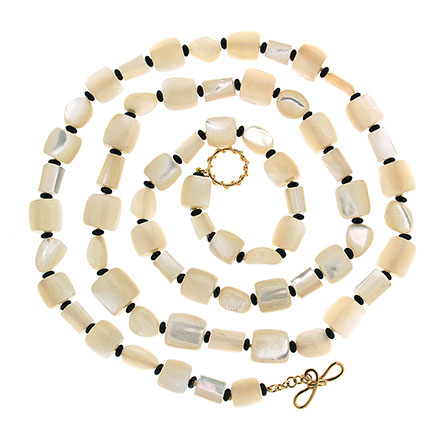 Due to the gem’s opacity, it’s not compatible with faceting. Other techniques help draw out its beauty. Cabochons are a cut consisting of a tall rounded top and flat bottom facet. Nacre carved into cabochons reflects light from all directions, showcasing iridescence. While round is the most common shape, pear, oval and even shrimp-like forms are possible.

Beads are a versatile way to enjoy mother of pearl. They can take a variety of shapes, from balls to disks and barrels. Nacre beads may be strung alone or with other gemstones to create colorful necklaces. A single bead can serve as an earring accent.

The shape of nacre makes it well suited for as inlays. This involves cutting a gem into flat pieces and placing it flush against metal. Inlays may be further embellished with raised precious metal borders or adding other gems to the design. A unique variant involves placing a translucent jewel atop nacre to enjoy the play of light and color.

Mother of pearl’s softness allows for ease of cutting. Carved, it can take on a wealth of forms, such as links in a bracelet or fanciful pendants. Details can be quite intricate, including veins on a leaf. Twisted gold and minute diamonds may be placed on the jewel for added beauty.

Along with jewelry, mother of pearl is used to adorn everything from walls to guitars. As inlays, it highlights bows, headstocks and other musical instrument parts. When laminated onto tile, nacre is perfect for mosaics and other complex decorations. If it’s coordinated with lighting, like a sconce and candelabra, the effect can be breathtaking.

Spoons carved from mother of pearl are used to serve caviar. The food has an unpleasant reaction to metal, affecting the taste. Utensils made from other materials safely handle caviar without harming its flavor. Mother of pearl in particular adds an extra sense of luxury.

Nacre is a popular source for buttons. Its most whimsical manifestation come from the Pearly Kings and Queens of London, also known as “Pearlies.” They’re known for the complex mother of pearl button arrangement on their clothes. This in turn is used to draw attention to and raise money for local charities.