Pear cut diamonds are a modified brilliant cut. They provide brightness but are best known for their shape, round at one end and pointed on the other. It’s a versatile form, appearing as drops on earrings and pendants, petals on floral designs and so on. On engagement rings, they can be mounted in a variety of ways for different looks. 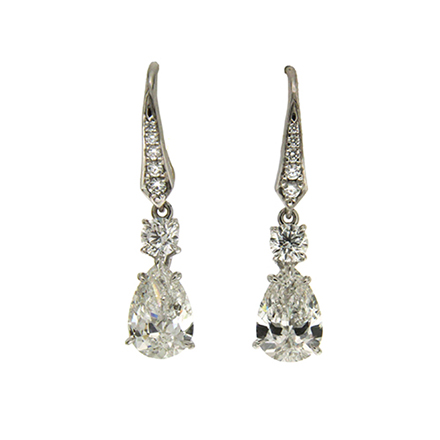 As a central jewel, pear cut diamonds are usually set so the tip aims towards the fingernail. Pear side stones may set lengthwise along the band or point forwards. Other possibilities involve incorporating the jewels as part of a leaf or garland motif.

The broad end of a pear cut is flanked with shoulders. Wings edge the narrower side of the jewel, finishing in a point. As with other cuts, the crown, girdle and pavilion influence the stone’s proportions. A well-crafted gem should have light travelling evenly throughout.

If a pear cut diamond has a bow tie shadow in its middle, it was probably cut to conserve weight. Ideal pear cut diamonds have balanced light and shadows rather than an excess of either. They have defined tips, while their shoulders and wings are neither too round nor flat. Try to look at several samples before choosing the one you like.