Gemstone quality corundum comes in two categories. When it has high amounts of trace chromium, it’s a ruby. All other types are known as sapphires. Pure corundum is colorless, achieving its many hues through trace elements. While sapphires are available in every color other than red, the jewel is most famous for its blues, achieved through iron replacing parts of its crystal structure.

Sapphire’s chemical formula is two parts aluminum to three parts oxygen. Its crystal habit is trigonal, with well-shaped rough appearing as six sided elongated stones with tapered ends. Other specimens may appear as flattened tablets. Sapphire’s luster is classified as vitreous, or glass like, though it’s not uncommon for stones to have a silky sheen.

In jewelry, sapphire has been admired since antiquity. It’s among the three most popular colored gemstones, along with rubies and emeralds. The gemstone’s Mohs hardness of 9 makes it durable enough to wear in rings and bracelets, though it also appears in necklaces, earrings and other pieces. Sapphires are transparent enough to allow for faceting, though it’s also carved into beads and cabochons. 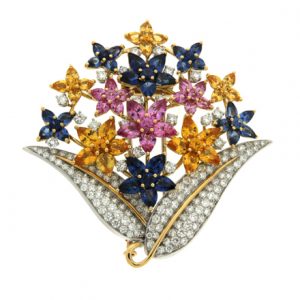 Sapphire is found on multiple continents, including Asia, Australia, Africa and North America. Among the most famous sources is Kashmir, India. Though the mine was only active between 1881 and 1887, the term “Kashmir sapphire” is still used today to indicate intense blue stones with a velvety appearance. It’s important to remember that source is not a guarantee of quality. Beautiful gems are found in many locations.

Sri Lanka may be home to the earliest sapphire mines and produces sapphires to this day. It is known for producing deep blue jewels, like the Smithsonian Institute’s Logan Sapphire. Sri Lanka is also a source of fancy sapphire colors, producing jewels of almost every hue. The country is a major producer of coveted orange-pink sapphires.

The state of Montana contains many sapphire deposits, one of the most famous being Yogo Gulch. While Yogo sapphires over ten carats are rare, its jewels are exceptionally blue with high clarity. Sapphires in Madagascar come in a range of colors and saturations. Though deposits were found in the country in the 1990s, it already has a reputation for producing quality jewels.

Fancy
When a sapphire is a color other than blue, it’s considered fancy. Most sapphires are colored through a combination of trace iron, titanium and chromium, with varying quantities and proportions creating different hues. Exceptions include white sapphires, which contain little to no trace elements in their crystal.

Among the more popular fancy sapphire colors is pink. Where pink sapphires end and rubies begin is debatable, as standards vary by country. A jewel known as a ruby in Sri Lanka may become a pink sapphire in the United States. Determining hues grows more complicated if a jewel is rich in chromium but low in saturation, or has purplish or orange undertones.

Padparadscha is another sought after fancy sapphire. Its name comes from the Sinhalese “like a lotus flower,” though there’s disagreement as to the stone’s color. Desired hues sit between pink and orange, with light to medium tone and vivid saturation. Sri Lanka is most famed for producing this stone, though it’s also found in east Africa.

Phenomenal
When needle-like rutile crystals lay parallel inside a sapphire, a band of light appears down the jewel. If two or more sets of parallel rutile forms inside sapphire, they create intersecting bands of light which in turn forms a star. Sapphires with asterism can have anywhere between four to twelve rays, though most feature six points.

Star sapphires are cut into cabochons to best display their asterism. A well-shaped stone should have its star centered within the cabochon, with its rays touching the perimeter. The points should be symmetrical and well defined. Ideal body color for star sapphire is a pure blue that contrasts against the rays of light.

Other phenomenal sapphires exhibit color change. Sapphires with traces of vanadium reflect different colors depending on their environment. Under light with blue wavelengths such as sunlight, color change sapphire will show bluish hues. Light with red wavelengths gives the stones reddish colors. Color change sapphire comes in two versions, ones that transform from blue to purple, and those which go from green to reddish brown.

Industrial
Sapphire’s hardness and transparency makes it ideal for a variety of applications. Thin slices of polished sapphire are used in lieu of glass for items subject to heavy use such as watch faces, smart phones and barcode scanners. The stone’s high melting point also makes it suitable for laser components, as the material is less likely to suffer heat damage. Silicon and sapphire may be paired to create semiconductors, with sapphire insulating the silicon from stray currents and other harm.

To meet the demand for industrial sapphire, synthetic crystals are produced in laboratories. They’re chemically identical to sapphires produced in nature, but can be produced in large quantities with internal characteristics better suited for lasers and glass substitutes. The most common ways of producing laboratory sapphire are through trickling powdered chemicals through intense flame, or by dipping a seed crystal into liquid nutrients and slowly pulling it upwards.

Ideal Sapphire
When looking for sapphire jewelry, recommended colors are those with strong intensity, medium to medium dark tone, and little color zoning. Hues such as blue to violetish blue are more popular than those that are greenish or greyish. Sapphires are available in a range of carat sizes, from hundredths of a carat to dozens of carats large. Most jewels on the market are five carats or less. While prices increase for heavier jewels, other qualities have significant impact on value.

Sapphire often has clarity characteristics, such as healed fractures and other crystals mixed within the gemstone. Of the latter, long fine crystals such as rutile are common. Such characteristics may influence transparency, impart a silky sheen to the sapphire, or create optical phenomena. Depending on the clarity of the jewel, sapphires may be cut into cabochons or beads or be faceted. As sapphires show different colors when viewed at different angles, cutters aim for the most desirable hues to appear face up.