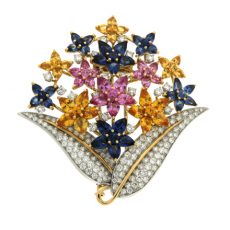 Sapphire’s chemical formula is two parts aluminum to three parts oxygen. Its crystal habit is trigonal, with well-shaped rough appearing as six sided elongated stones with tapered ends. Other specimens may appear as flattened tablets. Sapphire’s luster is classified as vitreous, or glass like, though it’s not uncommon for stones to have a silky sheen. 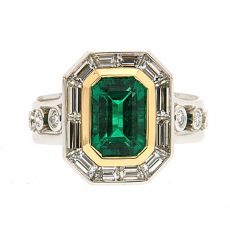 Emeralds, along with rubies and sapphires, are among the most famed of colored gemstones. For centuries, all green jewels, including tourmaline and peridot, were considered emeralds. During the 1700s, European chemists conducted experiments on beryls and emeralds, discovering they were chemically similar and had the same crystal structure. 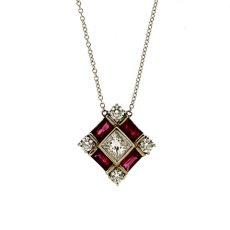 Rubies are the most celebrated of red gemstones. Their name in Sanskrit means “the king of precious stones,” and the gems appear in the crown jewels of many countries. Even now, the stone can command the highest per carat prices of all colored gemstones. For many years, people believed that all crimson jewels were rubies. By the nineteenth century, scientists understood that rubies were a subset of the mineral corundum, and a close relative of sapphire. Rubies are made of two parts aluminum and three parts oxygen, with trace amounts of chromium providing their famous hues. 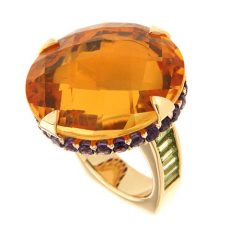 “Gem of Joy” – Coming from the French word citron, meaning lemon, citrine can vary in color from pure yellow to golden honey to smoky brown. Of all the naturally yellow gems, citrine is one of the most popular and affordable. Known for having good luster, citrine is available in many shapes and sizes. The most valued types possess intense orange colors. 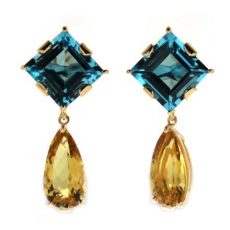 “Radiant Sunset” – Topaz is a mineral that comes in a variety of colors, including brown, yellow, orange, red, pink and blue. It is an eye-catching gemstone, with mined rough that is sometimes measured in Kilos instead of carats. Ancient Egyptians believed that topaz was colored by the golden glow of the sun god, Ra. To them, topaz was a very powerful amulet that protected the faithful from harm. Ancient Greeks thought that it dispelled all enchantment, helped to improve eyesight and had the power to increase strength and make its wearer invisible in times of emergency. Topaz was also said to change color in the presence of poisoned food and drink as well as cure insomnia, asthma, and hemorrhages.

From the pale blue of the summer sky to the deepest azures of the ocean, aquamarine sparkles in an extraordinarily diverse range of blue hues. A spectacular plunge into the unsullied sphere of beauty, aquamarine is an exquisitely beautiful gemstone. 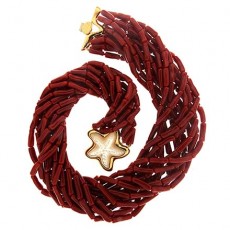 All beautiful gemstones are not born inside the earth’s crust. There are some precious gemstones that surface from within the sea. One such beauty is the coral gemstone. It is a gemstone that evokes a feeling of intense liking due to the intense color it possesses. Since they are formed by living organisms, they fall into the category of organic gemstones.

Who doesn’t have a fascination for diamonds? Everybody does! And when the most coveted gemstone in the world shares a deep connection with all April born, it becomes a matter of immense pride for them. 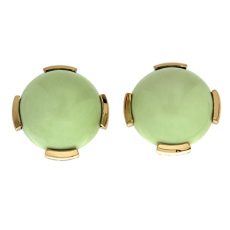 While emeralds are the most famous of the green gemstones, there are other verdant jewels of note. Chrysoprase is a gems quality subset of the rock chalcedony. As with other chalcedonies, it’s been used as jewelry, objects d’art and other items for millennia. Some museums have chrysoprase pieces dating as far back as the Roman or Byzantine empires. 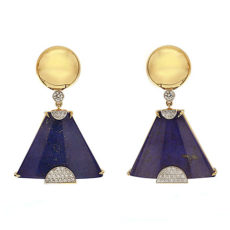 Lapis lazuli is an opaque gemstone famed for its luxurious blues. Depending on the individual stone, it may feature streaks of white, golden flecks, and even hints of green. In ancient times, it was known as “sapphire” along with other blue gems. However, there are many features which distinguish lapis lazuli from corundum. 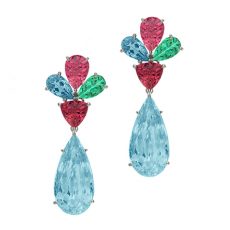 Coming from the Singhalese phrase ‘tura mali’ which implies ‘stone mixed with vibrant colors’, Tourmaline stands true to its name. It is one of those few gemstones which comes in a cluster of different colors. Tourmaline has one of the most cheerful and colorful personality amidst all the semi-precious gemstones. Owing to its multicolor nature and its metaphysical properties it has garnered huge popularity over the years. 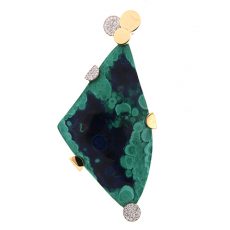 Malachite is an opaque gemstone with green hues and banded patterning. People have admired the gemstone for thousands of years. Ancient Egypt held the stone in high regard, giving religious significance to its color. Its hues also serve as an inspiration for the stone’s name, which derives from the Greek words for “mallow-green stone.”

Turquoise has been around for a long time, this jewel is found throughout the world in dry areas where the groundwater is acidic and rich in copper. The fluid reacts with aluminum and phosphate to create a gem that ranges in color from sky blue to the color of grass. The softness of turquoise makes it suitable for carving. Cabochons and beads are also common forms of turquoise, often used in jewelry.