Emeralds, along with rubies and sapphires, are among the most famed of colored gemstones. For centuries, all green jewels, including tourmaline and peridot, were considered emeralds. During the 1700s, European chemists conducted experiments on beryls and emeralds, discovering they were chemically similar and had the same crystal structure.

In jewelry, emeralds were long valued for their green hues, both for aesthetics and perceived healing properties. The stones are often fragile, leading cutters to shape the gems to reduce possible harm. Cabochons, or rounded stones with little to no facets, are common. Another cut, a rectangle with cropped corners, stepped facets and a broad table and culet, is so closely associated with emeralds it’s known as the emerald cut. 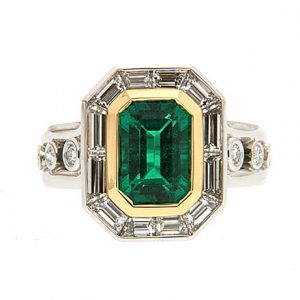 Emeralds, as with other beryls, resemble six sided columns in their rough state, an echo of their crystal structure. They may take shape as a result of hydrothermal activity, which combines very hot solutions of liquid elements with immense underground pressure, eventually crystallizing into solid stone. Depending on the location, emeralds may be a result of metamorphic action, which also provides intense heat and pressure.

Due to the drastic circumstances which creates emeralds, they have many clarity characteristics. While these quirks are aesthetically pleasing in emeralds, surface reaching characteristics may compromise the jewel’s durability. Despite these challenges, emeralds are between a 7.5 and 8 on the Mohs Scale of Mineral Hardness, which measures resistance to scratches.

Beryl’s chemical formula is made of beryllium, aluminum, silicon and oxygen. To give the hues emeralds are famed for, there must be traces of chromium, iron or vanadium. Chromium and vanadium provide green, while iron gives emeralds tints of blue. For many years, chromium was believed to be the jewel’s only source of green. However, a 1963 report by the Gemological Institute of America examined vanadium bearing green beryl, finding they were no different from emeralds.

Sources
Colombia is one of the most famous emerald sources. It’s believed to produce the highest quality stones of saturated green, though the country mines jewels of many colors and grades. The oldest and best known mines are located in the country’s northeast regions. Each deposit is famed for emeralds of slightly different hues, such as Chivor’s bluish greens, Muzo’s pure shades and Coscuez’s fiery colors.

Emerald mines in Brazil range from single person operations with hand equipment to heavily mechanized operations which use dynamite to loosen ore and heavy machinery for sorting and transport. The country’s emeralds form near high quantities of iron, giving the jewels a bluish shade. Their greens are usually light to medium, and used in jewelry suitable to most budgets.

Zimbabwe, as with other African emerald sources, produce jewels which have fewer fractures than emeralds from other locations. The country specializes in tiny jewels of intense green to yellowish green, courtesy of an environment rich in chromium and low in iron. In larger sizes, Zimbabwean emeralds may have overly dark rough, and cut to lighten the stones.

Pakistan’s Swat Valley in Khyber Pakhtunkhwa province produces emeralds which rival Columbia’s in terms of quality. The high chromium and iron levels of the region creates jewels that are medium to dark bluish green and may require special cutting to create lighter tones which better show off the hues. Traveling to and from the mines may involve roads prone to landslides and other delays, adding challenges to mining and export.

Internal Characteristics
Emeralds often possess mossy or vine like features visible to the naked eye, caused by partially healed fractures, feathers, and other inclusions. Collectively known as an emerald’s jardin, they’re considered an attractive feature of the gemstone. Since heavily included jewels may have compromised durability or diminished hues, emeralds are frequently treated to protect the gemstone or improve its colors. If you have questions about your emeralds’ treatment or durability, feel free to consult your jeweler.

Trapiche emeralds were first discovered in Colombia. Named for the Spanish word for sugar cane mill, these emeralds have rays which emanate from the center of the rough, resembling wheels or stars. A 2015 paper determined that trapiche inclusions occur when emeralds form in carbonate veins, influencing the jewel’s growth. Well-formed trapiche emeralds are fashioned into cabochons or cut into slices.

Emerald and Green Beryl
Though emeralds are verdant members of the beryl family, not every green beryl is an emerald. Though most gemologists agree that green beryls are too light to be emeralds, the line which determines where one ends and the other begins is a hazy one. Due to demand, emeralds are more likely to be found in jewelry. Green beryls are often cut to try to deepen their colors, making them more like emeralds. 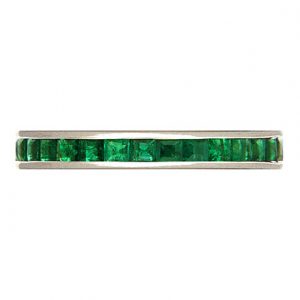 Color is one of emerald’s most prized traits, leading to guidelines as to what makes a stone an emerald. These range from green to bluish green, medium to medium dark tones and strong to vivid saturations. Jewels should have an even distribution of color, with no visible zoning. Slight differences in tone and saturation may have a strong impact on an emerald’s desirability.

While eye clean emeralds exist, they are extremely rare, commanding top prices. Gemologists classify emeralds as lightly, moderately and heavily included. Nearly every emerald has clarity characteristics apparent to the unaided eye. While jardins, garden like inclusions in emeralds, are an admired feature of the jewel, too many characteristics may take away from its appearance.

Unlike many other gemstones, emeralds can be cut and polished along nearly every direction of its rough with little fear of damage. Gem cutters still have to keep certain factors in mind, such as bringing out optimal color and avoiding inclusions which may impact durability. Emeralds cut parallel to the rough’s surface tend to have richer hues, and the depth of the finished stone impacts the tone. While cabochons and emerald cuts are common, emeralds may also be shaped into ovals, pears, hearts and other forms.

As with other pegmatites, rough emeralds can be massive, measuring hundreds to thousands of carats large. Fashioned emeralds tend to be much smaller, with most weighing between .05 to 5 carats, and gems one carat or higher featuring as central gemstones in designs. If all other factors are equal, larger emeralds may garner higher prices, especially top quality jewels.