Diamond eternity bands have a distinct appearance. The jewels may be of any cut, but are often round brilliants of the same size. They are set close together, encircling the entire shank. The rings get their name from this endless loop, which in turn is linked to love and commitment.

The first diamond eternity bands appeared in the 1960s. This was a time when rings with a single large stone were in vogue, but smaller gems were abundant. Eternity rings made with little diamonds accompanied marketing campaign tying the design to romance. The appearance and underlying symbolism charmed those who wished to honor their time together. 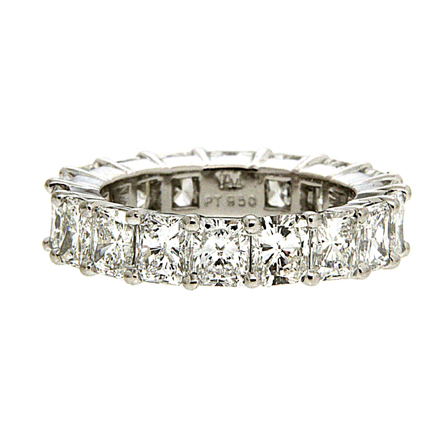 Eternity bands were originally promoted as a type of anniversary ring. The jewels tied together with engagement rings while standing out enough to serve as a counterpoint. Diamond eternity bands as anniversary gifts showed a relationship that was as strong as ever. This meaning also makes the design popular with wedding bands.

Aside from diamonds forming a closed circle, there is no one way to create diamond eternity bands. Cuts range from round brilliants to princesses, baguettes and more. One row of diamonds is common, while some designs sport three. Precious metal also varies, with platinum, white gold and yellow gold as top choices.