The Symbolic Quotient of a Wedding Band 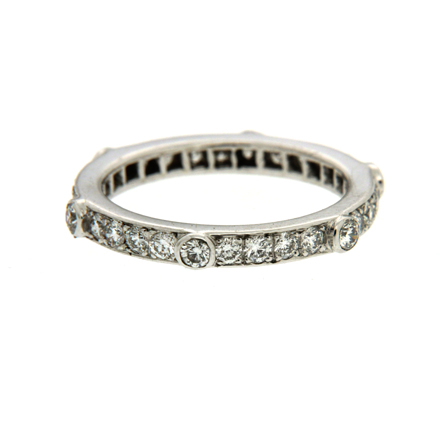 Eternity
A circle has no beginning, nor no end, in that, it is symbolic of eternity. Like time, the circle of a ring has no start, no finish, and that is perceived as an expression of eternity. When viewed from another angle, the ring is indicative of the continuous forward movement that people in marriage foster for growth and success. It is unity and eternity both. That’s why a ring is round, because it is emblematic of a marriage which is believed to be a union forever. There are cultures in which marriage is believed to last seven births which is the human’s cycle of reincarnation. So, it is safe to say that a wedding band is a symbol of a life together, a bond forever.

Indestructability
One of reasons why diamond is the chosen gemstone for engagement and wedding rings is its indestructability. A diamond is rare, and in that it is sacred. Such a gemstone is put on wedding rings with the faith that its qualities will reflect of the qualities of the marriage it stands for. Diamond is hard, durable and strong, something we all wish our marriages to be. So, in some ways, the wedding band represents the strength and beauty that a marital relationship ideally is known to be by which it rises over all relationships. So, the indestructability of a diamond is emblematic of the forever kind of love that is immune to all trials and tribulations of life.

Linked to the Heart
Last but not the least, a wedding ring has some obvious connection with our hearts. The real reason wedding rings are put in the fourth finger is that the finger has a vein that leads directly to the heart. So, wearing a wedding ring on that-same finger signifies the relationship to be linked directly with our heart. Thus, it says that through marriage, love finds the quickest path to one’s heart.

Which of these do you most believe a wedding ring symbolizes?