The Story Behind: Rose Cut Diamonds

Rose cut diamonds are in resurgence nowadays. What was a preferred gemstone in period ornaments has now made a comeback, with all its yesteryears’ glory finding a central place in today’s jewelry. If you have known only one kind of rose cut diamond and that is the ones you have seen antique jewelry bear, then you are standing on the precipice of a new and surprising revelation.

Bracelets to Brooches
Jewelers are rapidly adding to the variety of existing rose cut diamond jewelry. From rings to fancy brooches, drop earrings to gaudy bracelets, these stones are ornamenting all pieces with a mysticism that these stones embody. So far, only jewelers with the most eclectic taste have ventured into fashioning jewelry with these fabulous stones. This is because ornaments made of rose cut diamonds are not regular pieces, but are a poised blend of period and contemporary. While the stones spell heritage, the designs exhibit the finesse of modern jewelry. So, instead of spending thousands on a stunner from the Victorian era, you now have a shortcut to these amazing jewels.

A Rose cut Diamond through a Jeweler’s Loupe 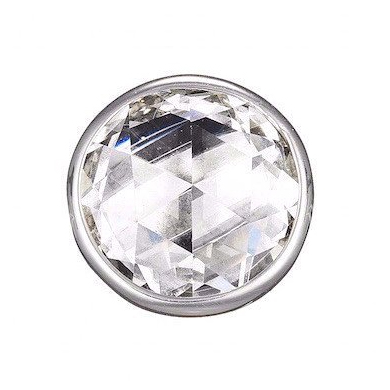 Traditionally, a rose cut diamond has three or six faces with a flat bottom or table and a crystal tip or apex. That is rose cut in its simplest form. These simple stones were very flat and had a roundish contour. They made their first appearance in the 16th Century. With time, the number of facets increased and with that, the complexity of the cut. What’s interesting about this particular cut is that pieces from the early times bear a consistent and intended asymmetry. The lines of a rose cut diamond was always irregular while symmetry remained thoroughly missing.

From the plain 6 facet cut, lapidaries took an enormous leap to a 12-facet rose cut. A second row of sides were added to the existing six, thus doubling it up. So, this new cut came to be known as the full rose cut, while the earlier one earned the tag‘simple’ rose cut. Between the two, jewelers observed three facets that together conjure the rose. These three sides converged to conjure some brilliance for sure, but that didn’t effectively have any dispersion.

So the subsequent logical inclusion to the cut was more facets cut onto the part of the crown. Earlier, the shine was missing largely because the facets were larger and that made little room for adequate reflection. Records suggest that these stones enjoyed a period of fame particularly in the 19th century when the lapidaries managed to perfect the cuts adding more lines and sides to it.

Rose cut diamonds make a soft contrast against the cold fire of today’s brilliant cuts. Currently, jewelers have their focus and loupe adjusted on this diamond cut, chiefly because of its radiating luminescence.