There is always a source of inspiration to all magnum opus, and that stands true for all trades. As for the jewelry industry, it stands on inspirations tall, teensy and colossal. Behind every work of a designer, there is an idea which lent its creative spirit. More often than not, the muse is the work of a greater and more successful designer. Here are some timeless pieces by the great masters that made their first and startling appearances in the flashy Hollywood award shows and had everybody at the very first glance. These pieces inspired the works of millions of jewelers out there, influencing the trend and tradition equally, thereafter. 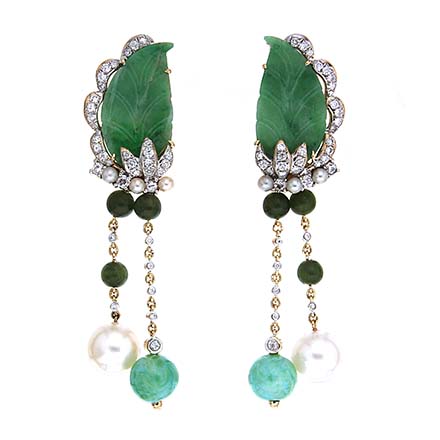 Jennifer Lawrence’s Assorted Gems Suite
In 2014, Jennifer Lawrence walked the Golden Globes in an assembly of accessories that sparked the interest of thousands. Her jewelry collection from that night included a pair of Buddha danglers, a bedazzling diamond bracelet and a clunky baguette-cut diamond ring. Gems like onyx, coral, jade and diamonds encrusted her earrings, while the other two were exclusively diamond pieces.

Jennifer Garner’s Diamond Platinum Riviera Neckpiece
Jennifer Garner’s sparkling neckpiece stole all attention at the Oscars, 2013, and for the right reasons. The actress stepped out of her car in a magenta off-shoulder gown that caressed her curves with a fabric so rich and luxuriant that surpasses the standards of the best. However, that wasn’t the best feature of her attire that night. The most attention-arresting of them all was the million dollar Riviera neckpiece that sat smugly around her neck wowing the crowd with its finesse and flash. The piece, an heirloom from a royal family of Europe, had a total of 80 carats of diamonds adding a shimmering fill from its intricately fashioned platinum contour.

Catherine Zeta-Jones’s Layered Necklace
Catherine Zeta-Jones is worshipped in Hollywood for her ageless beauty, but her taste in fashion is all the more reason why she deserves to be the face of the fashion industry. Her $10 million layered diamond necklace that she was seen wearing at the premier of her movie The Terminal in 2004 challenged the bests of high fashion. The neckpiece was layered with station-style chains with the outer one holding a sizeable halo pendant. Paired with that stunning piece was a pair of diamond danglers that made the best match for the breathtaking centerpiece.