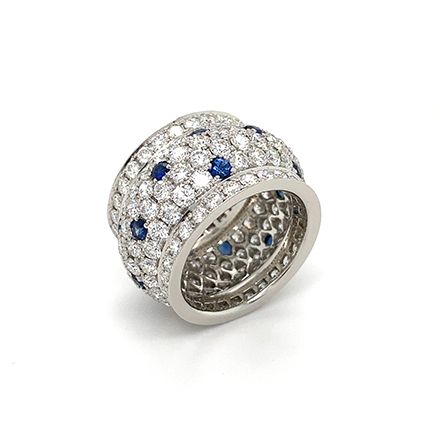 A diamond is every girl’s best friend. There is hardly a woman who is not won over at the sight of a diamond. That is why diamonds are so popular as engagement ring adornments in the first place. Diamonds found a permanent place in engagement rings and wedding bands, and later in anniversary rings and other jewelry. Of all the styles seen so far, pavé is the most people’s favorite. One of the bestselling styles at this point, diamond paving has become a coveted theme in wedding bands. For the clarity of judgement, here are some things to know about pave wedding bands.

Round VS Square Pavé
Typically, there are two kinds of shapes in paving a band, namely, round and square. A round pavé uses round-cut diamonds whereas a square pavé features princess-cut stones.  A round pavé wedding band offers a slim style that is comfortable to wear. Square pavé wedding band is angular, clean and intensely sparkling. It is modern and has a perfect lineup. Flat and straight, square pavé is sophisticated and ritzy.

Multi-Row Pavé Bands
Originally,the first type of pavéd bands that came to use featured a single row of gems with or without a center stone. The size of these gems varies from band to band, but each design accommodates diamonds of only one size for the paving. As designs evolved later, a new range of styles came. These bands featured more than one row of gems and gem shapes. It is twice as thick as the single row bands, but never too thick for slender fingers.

First, the two-row rings use smaller stones that dial up the sparkle. Additionally, two row pavé bands look slightly thicker than plain bands, but many times more gorgeous. There are also those bands that feature two rows of different thickness. These bands have a thick bottom row and a sleeker top row. The sizes of stones in two rows differ from one another, the bigger stones ending in the lower band and the smaller ones on the upper line. There are also those that have a crack-like seam in between that lets air in and out making it breathable.

Prices
While some buyers are intimidated by the price of solitaires, others find the price of diamond paved bands too hot to handle. The price of two can be close or equal, depending on the use of diamonds and the quality of the stones. One way to truncate the price of a pave band is to pick a two-row band that uses a greater number of gems of smaller size that amount to little.