Oval Cut: A Unique Cut for Your Very Special Jewel 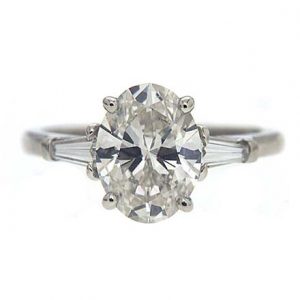 While the Asscher cut was brought into existence in the first half of the 1900s, the oval cut came much later. Created in 1960, the credit of this cut is solely owned by Lazare Kaplan. Made out of brilliant cut, it has overlapping aesthetics with round cut diamonds. Though round cut is phenomenally popular among customers, some like the oval cut better because of its difference from the common place. The elongated contour of the stones depart from the very predictable and usual orb of a round cut. Though neither owns an upper hand over the other, both cuts shine by their own rights.

The Optical Trick
One advantage however that cannot be overlooked about an oval stone is the illusion of size. A lapidary would recommend the use of stones like marquise and oval over round and princess cuts when the design requires a chunky gemstone. One might use two stones of similar size to curve them in oval and round, but in the end, the oval will appear bigger because of its shape. As for the brilliance and fire of the cuts, they are at par. So, it’s a win-win for those who are not hung up on round cuts.

Customizable Measurements
Same as a marquise cut, the oval cut does not have a predefined measurement limit. You can order your stone to be as fat or narrow as you like it. However, the lapidaries choose to have a certain ratio to secure the shape. Jewelers use a regular 1.35 to 1.50 scale for a classic oval cut. If truth be told, your stone appears a lot more attractive should it be a little thinner than the classic ratio. This shape however works best in jewelry that has the center stone flanked by a couple of peripheral stones on either sides. But thanks to the classical ratio, you know exactly how your diamond would look when it is delivered to you.

Bow-Tie Effect
Oval cuts too have the bowtie effect, and that stands between marginal to stark. Depending on how you want it, you may take a pick. You may specify it to your jeweler and they will accommodate to it. The degree of bow-tie a cut has can be determined by reviewing the certificates of the stones. Even the dimensions can tell you about it, or a minute of visual inspection. Do rest your faith on a diamond specialist to tell you about it.