The Origins of the Wedding Ring

The practice of wearing a ring after marriage dates back thousands of years. Wedding bands are worn on the fourth finger of the left hand as a way of connecting love and marriage. Legend spoke of a vein on this finger that led directly to the heart. Wedding rings are still about love, though the nature of the rings have changed over time. 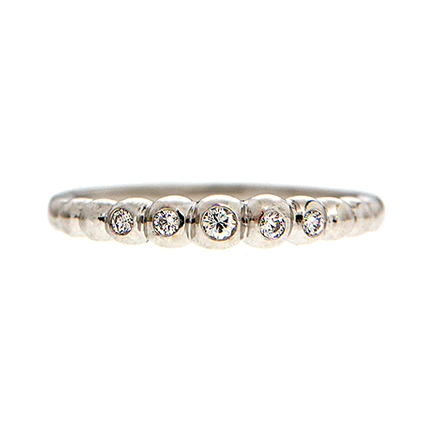 Wedding bands were first recorded in ancient Egypt. These earliest rings were made of braided grass and worn by both spouses. Greeks and Romans later picked up the tradition, bringing it to Europe. Over time, wedding bands changed from jewelry both spouses would wear, to a ring only for the wife.

By the Middle Ages, gold wedding bands with religious imagery were popular. Byzantine rings from the 6th and 7th centuries feature engravings of Christ, as a blessing for the marriage. A Jewish wedding ring from 14th century Italy uses gold enamel to convey its message.

Wedding bands for women during later periods were more secular in nature. The Renaissance debuted posy rings, silver or gold bands inscribed with lines of poetry or quotes from popular stories. The Baroque period saw the rise of gimmel, or puzzle rings for weddings. Both kinds of wedding band were also used for engagement rings.

The 20th century had many wedding ring designs cycle in and out of fashion and back again. Earlier in the century, platinum was in vogue, though eventually replaced with colored gold. Larger and smaller diamonds too changed favor. The most important contribution though was the return of wedding bands for men and women alike. Today, both members of a couple can showcase their love for each other.