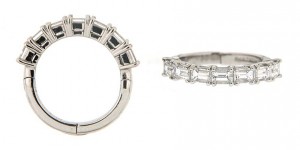 The special days of our lives should be commemorated in the most special manner. So when it comes to celebrating a milestone anniversary, the moment should be sealed with the most precious gift. There is nothing like renewing your commitment to one another on that day and re-living the moment in all its initial glory and excitement. Diamond anniversary bands are perhaps the most ideal gift option one can think of to surprise her on this day. A band is not only a symbolic significance of the bond you share, but it is also an everlasting symbol of love and commitment to each other. So whether it is your 5th anniversary or your 11th, a diamond anniversary band is an excellent choice.

Some popular choices under diamond bands are the pave-set and the eternity ring. The style of these rings symbolizes the unending nature of love and comes profound in special meanings. Listed below are some basic factors and guidelines you need to follow before buying a diamond anniversary band:

Above mentioned are some basic guidelines to buying diamond anniversary bands which will perhaps give you a direction to think. However, since it is a matter of the heart, trust your instinct and follow your heart when choosing the perfect anniversary band for your love.