Garnets, the Gem That Radiates Intensity and Vitality

If you love colors in your gems, chances are you will like garnets. These sparkling red colored gems bring an almost distracting splash of color to any jewelry, and guess what, they are inexpensive when compared to rubies. Looking very close to rubies, garnets are the birthstone for the month of January. Garnet in nature occurs in a rich diversity wherein they vary widely in color and clarity. While in some, the color is intense, while in others the opacity is too low for the color to even show. But however dark or light, clear or opaque a garnet is, it is striking. 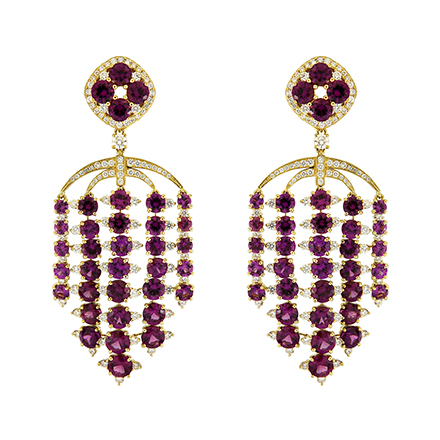 Garnet in Jewelry
The beauty of garnets is that they work with all kinds of metals. To white metals, they add warmth and to warmer metals they add a softness which in both ways, balances out the excesses. It is very difficult for a piece of jewelry with garnets in it to look garish or too sublime. Set a chunky piece of garnet in a white gold or platinum piece of jewelry and what you get is a statement jewelry at an unbelievable price.

History
The name garnet is derived from the English word “gernet” which in the 14th century meant dark red. In fact, etymologically, the words “garnet” and “pomegranate” share a common rooting, both referring to the dark red color of the gem. The gemstone is traced back to as far in time as the Bronze Age when it was in sparse use. In Rome, the stone was a highly popular gem often used to decorate jewelry and crockery. The stone is known among the people of other civilizations, the Egyptians for instance.

Use of Garnets in Today’s Time
Although the popularity of garnets does not outdo that of its pricier counterpart ruby, it is still a very popular choice in colored gems. The birthstone of January, a garnet makes for a great second wedding anniversary gift. The benefits of garnet are believed to be immense in purifying and revitalizing the wearers. It is known to bring peace and serenity to its wearers. Garnets are seen as symbols of a loving and lasting friendship, and therefore, makes for an apt present from one friend to another in celebration of the bond between them. Legends say that those who wear the stone for an extended period of time act with great kindness.