Eternity bands are rings with a row of diamonds which surround the entire band. While similar rings appeared in the 18th century, modern versions have romantic links. The nonstop circle of gems is meant to show enduring love between a couple. The ring is gifted during romantic milestones, such as weddings or anniversaries. 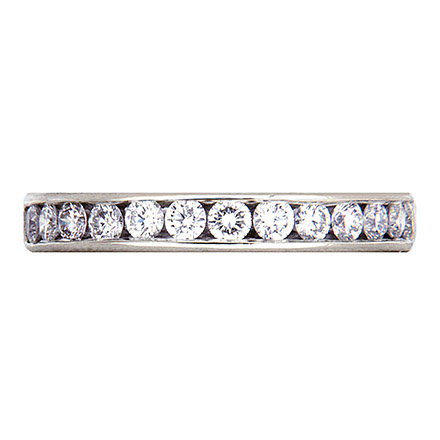 Modern eternity rings came about during the 1960s. De Beers acquired a large amount of diamonds, most of which weighed 0.25 carats or smaller. Common diamond bands at the time were solitaire rings with larger stones. Diamond eternity bands were promoted through campaigns underscoring the romance of the design.

Eternity bands can have many settings. They are frequently prong set, with or without common prongs between jewels. Pave set rings are also common, and may feature two or more rows of stones. Other mounting styles available include channel and bezel settings.

While round brilliants are the most popular cut for this ring, other styles are possible. Princess cuts provide brilliance with a less typical shape, as do pear and radiant cut diamonds. Those who enjoy the look of step cut diamonds may choose from emerald cuts, baguettes and others.

The number of diamonds on eternity bands vary. An endless circle of diamonds may look pretty, but may be uncomfortable to wear. A version of the eternity band features diamonds that surround half the ring. This design is sometimes known as a half-eternity ring, and combines aesthetics with ease of wear.

Eternity bands were promoted as gifts honoring a lasting romance. Early advertising suggested giving them as anniversary gifts. Today they’re also exchanged as wedding bands. For either occasion, the emotions behind the ring are the same. The ring remains popular, and come in many designer styles for an array of tastes.