If you have already gained acquaintance with an emerald-cut diamond, you probably are a fan already. A sinfully beautiful cut, emerald cut diamonds are a product of the 1500s. Extremely elegant and delicate, an emerald cut is one of the oldest cut there is. However, it re-emerged in 1920s when it came to the notice of the masses for its distinct Art Deco flair and clean lines. An emerald cut is nothing like the other cuts you have seen. In fact, it is strikingly different from cuts like Asscher and baguette with which it has visual resemblance.

A Closer Look at the Emerald Cut
The uniqueness of an emerald cut is secured by its open step-like facets which lend the stone a different kind of luster.The signature flash of an emerald cut it owes to this peculiar cuts and faceting. An emerald cut is oblong in shape and remarkably symmetrical, a result of calculated shaping and cutting. While that gives the stones a gleam which is typical to the cut alone, it’s flattering shape makes fingers appear more slender and longer. 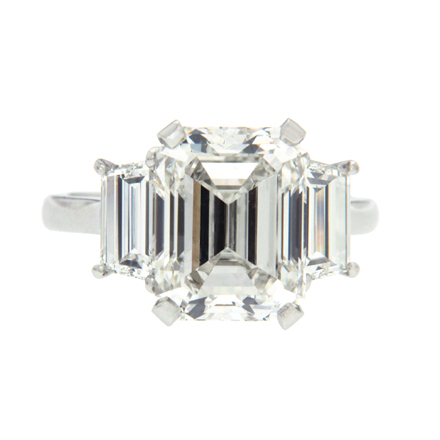 The Three-Stone Ring Gem
You may have seen all kinds of cuts on the three-gem rings, but how about emerald cut? That is not a very ordinary concept, but those who have tried have produced shiningly successful results. The combination of emerald-cut diamonds and three-stone style is an aesthetic success. While the stones bear their unmistakable vintage feel and look, the contemporary style of the ring gives the pieces a very trendy feel that goes beyond trends and fashion.

In Drop Earrings
Emerald-cut diamonds on drop earrings is another great way of celebrating vintage with modern. The unusual shape of the stones coupled with their signature gleam give the earrings a striking look and feel.