Why are Cushion Cut Engagement Rings becoming so popular? 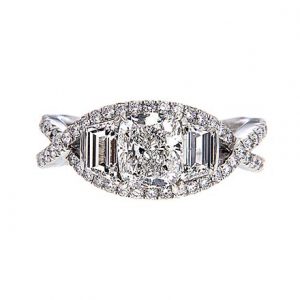 If there is one cut that has the power and beauty to outshine the very popular round and princess cut, they are the cushion cut engagement rings. They are challenging to find because they are still not available in large numbers yet, that doesn’t rule out the fact that they are already on the brink of taking the place enjoyed by the round and princess cut diamonds. The cushion cut diamond is so called because it shares much similarity with plump pillows or soft cushions. They were hence known by the name pillow cut though they are also called candlelight diamond because of their beautiful glow under the effect of a candle light.

The Features which make them extraordinary
Cushion cuts may be square or rectangular. They may not possess the fiery fire and brilliance of a round or princess cut but they have a romantic appeal that is absolutely unparalleled. In other words, they are endowed with a sparkle and shimmer that is uniquely theirs and no less beautiful. They are the oldest types of fancy diamond cut and were initially created to shimmer. Cushion cuts have soft edges that produce a rainbow of candlelight. They are classic and versatile and have always been a favorite choice since the 19th century.

Cushion cut diamond of a length-to-width ratio of 1.0 render a perfect square shape while ratios higher than 1.0 are more rectangular. Unlike the princess cut, the cushion cut diamonds have rounded edges and hence are not prone to chipping and damage and does not catch on to clothes or hair.
Today, it is experiencing a resurgence in popularity for reasons plenty. Several of the world’s famous diamonds are cushion cut. The Napoleon Diamond Necklace, the Archduke Joseph, Cullinan II etc. In addition, celebrities like Kim Kardashian, Kelly Rowland, Jessica Biel sport cushion cut engagement rings.