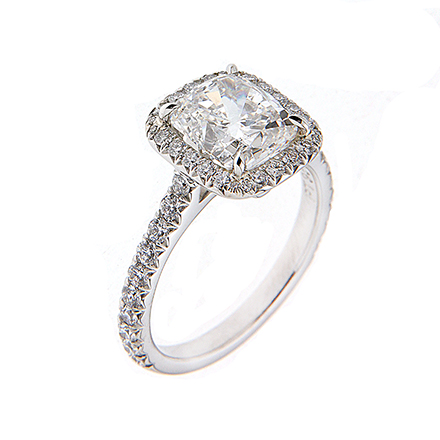 Cushion cut, a very popular fancy cut in diamonds is a square or slightly rectangular shape with the corners knocked off. Its shape gave it the alias pillow-cut by which it goes among non-technical people. A very elegant, and soft-looking cut, emerald cut diamonds go back 200 years when it first came to the market. Today, it is a classic choice of gem for engagement rings. Cushion Cut has about 58 to 64 carats and is highly favored for its fire and brilliance. Through its many facets the diamonds reflect light causing it to sparkle and flash under bright light.

Some Popular Cushion-Cut Diamonds You May Have Heard of Already Because of its scarce existence, most people hold the notion that it is a new cut. On the contrary, the cushion cut is a pretty old cut. Let’s take a look at some very popular vintage diamonds that wear the cushion cut.

Yellow Tiffany Diamond: The 128.54 carat yellow Tiffany diamond too was a cushion-cut stone, one of the largest in the fancy-colored diamond category. The diamond got its name from the movie Breakfast at Tiffany for the promotion of which the beautiful star Audrey Hepburn wore it.

The Regent Diamond: Another popular cushion-cut diamond that you may have read of somewhere is the Regent diamond. A 410ct diamond, this too comes from India. Hailing in Andhra Pradesh in 1968, the stone’s rumored first owner was a slave. The Regent Diamond passed hands when it was stolen by a fabled sea captain.

Today, cushion-cut diamond rings are often spotted on celebrities who embellish the rings as a style statement. Popular women of the likes of Jennifer Garner, Ivanka Trump, Miley Cyrus, Kim Kardashian and Molly Sims have owned diamond rings with cushion-cut diamonds on them. In our society, it is now identified as a symbol of love. Dainty and elegant, a cushion-cut diamond makes a great pick for engagement rings. Beyond that, it is also seen in vintage-inspired rings for its very antique look.