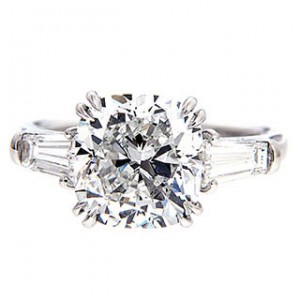 Diamonds are cut and sized in diverse shapes to manifest its beauty and brilliance. Over the years, the cuts kept diverging from one another, gradually growing in numbers. Today, we have about some 20 or more cuts in which diamonds are shaped. Some are outrageously popular, others are next to nonexistent in the furor. This article concentrates on the cushion cut, which is also referred to by the industry insiders as the old mine cut. This might come as quite a hit, but indeed the cushion cut is as ancient as 200 years old. In fact, it was the most popular cut in the first century, enjoying fame that can be equaled with the round-cut today.

A Closer Look
They almost came to become the face of the stones. Till the early 20th century people knew diamonds to have a de facto shape and that is the cushion cut. Speaking of this cut in specific, it has the property of deflecting light substantially. Light rays, as they hit on the surfaces of a cushion cut stone return back in wider streaks. The cut has a larger culet, something that improves the beauty of the stone when seen down its top table. The cushion cut was thus given a very unique look which is why the antique stones still come to be prized to this day.

When It Happened
Going back to tracing the origin or inspiration of this cut, it partly owes to Marcel Tolkowsky who started the ground work for this cut first. It was back in the year 1920 and the version we see today is only after surviving the modifications made to it through centuries. The cushion cut in fact didn’t look quite as it does today, though the basics have remained to be identical. In fact, designers have deliberately worked on the shape, finish and polish of the cut to bring back to it the glory of the heydays.

A Curios Trivia
An interesting factoid about cushion cuts is that it has variable standards. As a matter of fact, the perimeters are so flexible that no other can stand as its equal. However, much of that modifications are triggered by personal demands. Regardless, the high points of cushion cut diamonds are their fire. Though they are known to have brilliance lesser as compared to round cuts. However, cushion cuts have the advantage of being an easy pick for unconventional designs.