Diamonds are priced on four factors commonly known as the 4 Cs. Of them, one is color, an important aspect, speaking qualitatively in particularly. Diamond, as we know it, occurs in nature in many different shades. Depending on the tone and shade they bear, they are sorted and categorized for processing, and later sale. Pink, blue, green, yellow, orange, you name it. But, of all the natural shades of diamonds, the colorless variety is the most popular. This little fact coupled with the rarity of colorless diamonds has given the pricing of diamonds a certain trend. The less the body color a diamond has, the higher it is priced. 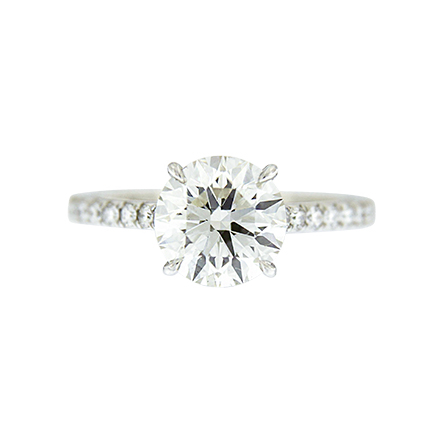 The Scale and Its Gradations
GIA, AGS and other globally recognized boards responsible for grading gemstones have entire charts with gradations under which every diamond tested and placed and thereby certified. As for GIA, the scale runs from D, which is completely colorless to Z that is lightly colored. In between, there are about 10 different grades each standing for a certain shade.

The Top Grades
The first two grades Colorless and Nearly Colorless also make the top grades. Buyers who want to pick from the finest grade alone traverse between these two grades. At the top is D which is the perfectly colorless kind and also the priciest of the lot. E and F occur under it. Though the differences are impossible to penetrate for untrained eyes, there is very slight color included in the later grades. As for the Nearly Colorless kind, that category is split into four grades, G, H, I and J, G being the lightest and J being the darkest. Again, that is not to say, any of these stones have perceivable colors in them, but when magnified 10X, they give off some color which results in the grading.

The Medium Ones
The medium quality stones are those that appear in the part of the chart between Faint starting at K to Very Slightly Color, ending at R. The presence of a gentle murky yellow is visible from this point on that only gets more visible as you go towards the bottom. If you are too particular about colorless diamonds and sensitive about colors on them, then this is surely not your section.

The Last Two
S to Z from the Light color are the last two grades. The stones at this point are visible brown or yellow, and are consequently priced low.