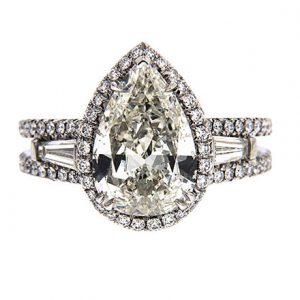 Diamond rings are a versatile accessory, suitable for dressing up a casual outfit, commemorating a wedding, and durable enough to be worn every day. Some diamond rings, be it thorough their color, carat, design or owners, are spectacular enough to be named.

One of the most famous diamond rings is the Elizabeth Taylor Diamond, previously known as the Krupp Diamond. The 33.19 carat Asscher cut diamond was a favorite of Taylor’s, who wore it with a platinum mount and baguette side stones. Along with its size, the diamond is remarkable for its colorless D grade and unusual purity.

Another ring beloved by Elizabeth Taylor is the Taylor-Burton Diamond, named after her and her then-husband Richard Burton. It was originally a 241 carat rough from South Africa, and was soon cut into a 69.42 pear shape diamond and mounted onto a platinum ring. Burton bought the diamond at an auction as a gift for Taylor, who debuted the ring at a Monaco party. The jewel’s time as a diamond ring was short, as Taylor found the jewel too heavy for her hand, and had it mounted onto a necklace.

The Winston Blue ring is made of three pear cut diamonds. The side stones are about one carat each, and are both the very light D grade color, and rated Internally Flawless. The central jewel is even more exceptional. Not only does it measure 13.22 carats, it is a Flawless grade Vivid Blue diamond. In 2014, Christie’s auctioned the ring for a record breaking 23.8 million dollars, or 1.8 million per carat. Previously known as the Blue, the ring has been renamed in honor of its current owner, Harry Winston Inc.

The centerpiece of the Sweet Josephine diamond ring is a 16.08 cushion cut diamond rated a Fancy Vivid pink. According to Christie’s, who sold the ring, the Sweet Josephine is one of three Fancy grade pink diamonds over ten carats to be sold in the past two and a half centuries. The jewel was auctioned in 2015 and for a record breaking 28.5 million dollars. Soon after purchase, its owner Joseph Lau named the jewel after his daughter Josephine.