A Look Back at Wedding Bands

After a couple marries, one or both wear rings to commemorate the change in their relationship. Wedding bands are an ancient tradition said to be thousands of years old. Over time, what they look like and what they’re made from has changed. From simple materials to precious metals, puzzles to diamond studded confections, one thing remains the same. People wear wedding rings as a show of love and commitment. 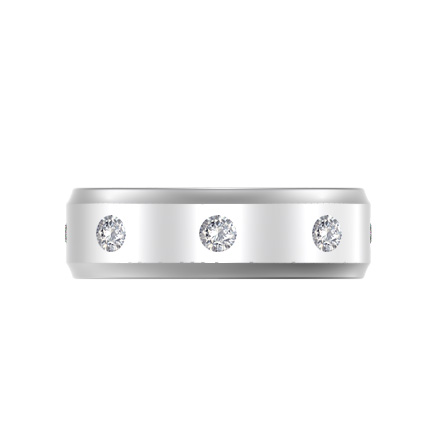 The earliest known wedding bands come from ancient Egypt. Art up to six thousand years old show spouses exchanging rings made of braided reeds. Romans adopted a similar practice for their marriage rituals. Vena amoris, the vein said to run from the ring finger directly to the heart, comes from Latin.

Posy rings were popular during the Renaissance and Baroque eras. They got their name from the “posies,” or poems inscribed on the shanks. These rings were exchanged as lover’s tokens, though they also served as engagement rings and wedding bands. Posy rings could be gold or silver, and engraved on the inner or outer bands, or both. Some versions had gemstones, though most were left plain.

Gimmel rings enjoyed a heyday during the 16th and 17th centuries. What appeared to be one band could split into two or more wearable rings. The shanks had interlocking elements which helped reunite the two halves. Gimmel rings served multiple roles. Apart, they were worn by both members of the couple as engagement rings. At the marriage ceremony, they were reconnected to form the woman’s wedding band.

Today, men’s wedding bands are as common as those for women. Gold, colored gold and platinum are popular choices, as are diamond wedding bands. Couples can select plain or diamond, coordinating or other custom rings. Imagination is the limit.