Symmetry is where one half of a shape mirrors another. Some forms like squares have multiple lines of symmetry, while others such as hearts have just one. With diamonds, symmetry helps determine if a cut is well made, and influences the stone’s brilliance. Rings themselves don’t have to be as strict. Designer engagement rings can play with symmetry to attractive effect. 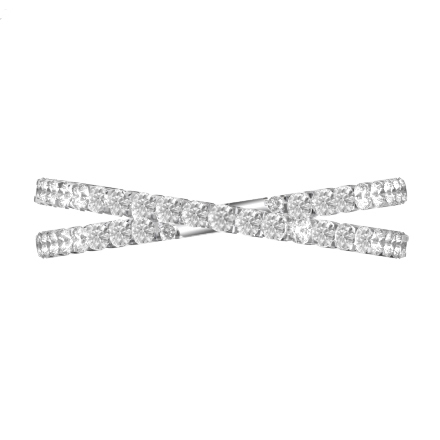 A diamond’s cut is carefully proportioned so the greatest amounts of light can reflect inside the stone. Asymmetry may throw off some of these measurements, reducing brilliance. The effect might be dramatic or subtle, depending on the jewel. If in doubt, ask to see the diamond’s certificate and check the appropriate grades.

Asymmetrical rings come in many forms. Subtle versions include weddings bands with woodgrain designs or rows of diamonds which seem to coil over one another. One popular diamond wedding band is the crisscross ring, which resembles one band overlapping another. With engagement rings, the ends of the band may rest on opposite sides of the diamond.

One type of ring is known as the bypass or the toi and moi. The band does not form a closed circle, but forms a curl with two ends passing one another. Depending on the design, the tips may touch each other or stay apart. Each end holds a mounted jewel. One or both settings holds a diamond, and sometimes a colored gemstone. The two jewels represent the members of a couple, and can serve as an engagement, wedding or anniversary band.

Other parts of the ring can also feature decorative asymmetry. Trellis mounts have prongs which curve over the sides of the band, creating a series of crisscrosses. Other diamond rings feature a wide border of gold around the central diamond, forming a swirl or knot pattern. Those who enjoy less dramatic decorations can look into engravings to make their ring decoratively unbalanced.