“Beauty of the Sea” – The pearl is an organic gem formed inside of oysters. They originate from nacre, a lustrous substance which forms over small irritants trapped inside the mollusk’s shell. When several layers of nacre build up inside the oyster, a pearl is born. There are many different kinds of pearls, varying by size, color, shape and species of origin. The most valuable of these jewels are perfectly symmetrical with a brilliant luster, relatively large and naturally produced. Legend states that pearls are considered to offer the power of love, money, protection, and luck. Pearls are thought to give wisdom through experience, to quicken the laws of karma, to cement relationships, and to keep children safe.

Early Chinese myths told of pearls falling from the sky when dragons fought. The Greeks believed that wearing pearls would promote marital bliss and prevent newlywed women from crying. Ancient legend says that pearls were thought to be the tears of the gods. 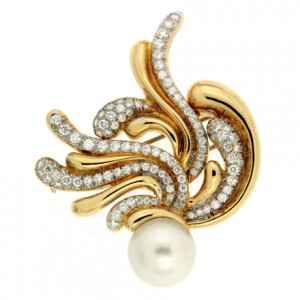 When an irritant such as a piece of sand enters the shell of a mollusk, the animal responds by surrounding the intruder with calcium carbonate, the substance that creates the mollusk’s inner shell. While any shell animal can create a pearl, the kind most beloved by connoisseurs come from the freshwater Unionidae family and the saltwater Pteriidae oysters. The jewels that come from these species are nacreous, featuring the iconic muted glow and rainbow sheen known as a pearl’s iridescence and orient. Non nacreous jewel quality pearls come from conch, abalone, and melo melo species.

Natural pearls are extremely rare. For every 10,000 mollusks, one may contain a pearl. For thousands of years, pearls were worth their weight in gold, rarer than diamonds. Cleopatra’s most extravagant banquet consisted of simple food. At the end of the party, she dissolved a pearl earring valued at 60 million sesterces in vinegar and drank it.

For centuries afterward, pearls remained as precious as diamonds, rubies, sapphires and emeralds. During the time of Charlemagne, wealthy patrons donated their jewels to churches, who in turn used the pearls to adorn holy texts. One surviving example includes the Ashburnham Manuscript, which is covered in gold, colored stones and ninety-eight pearls. From the late Middle Ages through to the Renaissance, those who could afford it wore pearl jewelry with still more stitched onto their clothing. During the Belle Époque era in Europe and America, pearls were favored amongst wealthy women for long strings of many tiered necklaces, bracelets and even tiaras. In 1917, one man traded his Fifth Avenue mansion for a double strand of pearls.

The value and rarity of pearls lead many to try to cultivate them. The ancient Greet writer Theophrastus recorded the tale of people by the Red Sea diving for oysters. After piercing the mollusk’s flesh, the people poured the resulting fluid into molds. As the liquid hardened, pearls formed. A much later belief, first recorded in the 1690s and lasting for nearly two centuries is the use of rice and cotton in cultivation. Nestling good quality pearls and rice in cotton and placing arrangement in a box for a year was thought to increase the number of pearls inside, while the rice grains grew shorter, looking as though they’ve been nibbled. This technique was also believed to make pre-existing pearls larger. 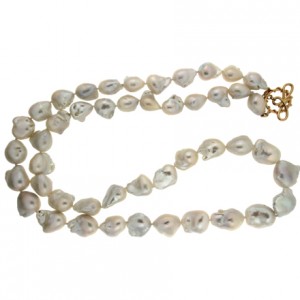 As far back as 320 AD, powdered pearls have been used as medicine, particularly in China.  Empress Wu Zeitan was known for using pearl powder both topically and as an internal remedy to protect her health. A later text known as Bencao Gangmu expands on the health benefits of pearls, detailing their use for healing skin, treating eye diseases and preventing heart attacks. Pearls served a similar purpose in Indian Ayurvedic medicine, as well as serving as an element in love potions. In the present day, pearl powder may be consumed to help promote bone strength, due to its high levels of calcium.

Archbishop Rabanus Maurus wrote around 850 ACE how pearls represented the kindness and sweetness of celestial life, as well as the hope of heaven. An earlier cleric, St. Augustine, believed that pearls represented Christ. Over the centuries, pearls retained their ideal of purity and innocence.

Writers such as Faust, Wordsworth and Shabl Abdullah have likened people of great virtue and kindness to pearls.

Pearls were associated with Venus partly due to their beauty and connection to the oceans. The Venus connection also made pearls a symbol from the time of the Roman Empire onwards. As late as the 20th century, this connection remained. During the 1800s, it was popular for the wealthy to offer pearls as a wedding gift, though tradition stated it was bad luck to wear more than a few during the marriage ceremony.