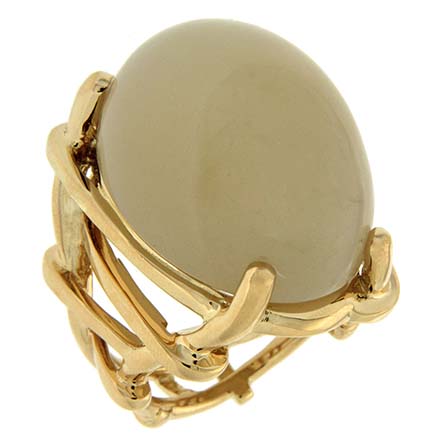 Moonstone gets its name from the way it resembles moonlight through the clouds. The way light plays across the sky, turning it blue, plays a similar role in giving moonstone its distinctive gleam. This play of light is known as adularescence.  Ideally, a moonstone should have a pale blue body color with bright blue adularescence, though white body color and white light are also admired. The hazy light should float on the top most portion of the stone, even as it’s turned from side to side. Moonstone is usually cut into cabochons to best display its aduarescence.

As a gemstone connected with the moon, it’s lore is strongly linked with the night sky and those associated with it. Roman and Hindu mythology say moonstone is made from frozen or solidified moonlight. Indian further states that moonstones are so special, they should only be displayed with holy colors. Romans connected the jewel with their lunar goddess Diana.

Moonstones are regarded as potent talismans for good fortune. It is recommended for 13th wedding anniversaries, as a charm against the unluckiness of the number. The stone also supposed to enhance the feelings lovers feel for one another. If one places a moonstone in their mouth during the full moon, the couple’s future will be revealed.  Other mystical properties include moonstone’s ability to induce good dreams in Indian lore, and protect fertility in Arabic legends. In France, some specimens were closely linked with the jewel’s namesake. Antoine Mizauld wrote in 1571 about a moonstone he learned that it could wax and wane in time with the moon in the sky. He spent a month closely observing the stone to verify this claim, and found that there was a white speck of light on the jewel that acted as a miniature moon.

Moonstones are prized for their misty blue light. They are so reminiscent of the night sky that many of their legends and attributes are related to the moon. The jewel is related to everything from moonlight, lunar goddesses and the phases of the moon. Moonstones are also linked to other positive traits, such as fortune and love.