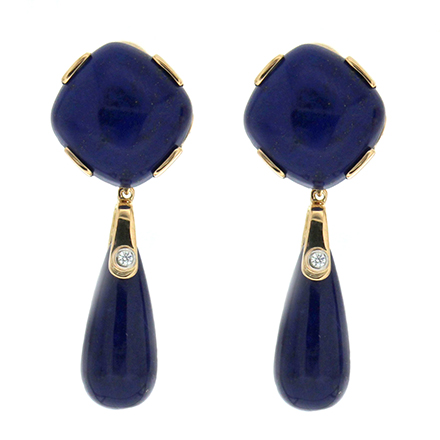 Named for the Latin, Arabic and Persian words for stone, lapis lazuli is an opaque mineral famed to its deep blue hues. There is no one chemical formula that makes up this jewel, which is an aggregate of lazurite, calcite, sodalite, pyrite and other materials. It’s variable nature creates stones with body colors ranging from greenish or violet blue to the deepest of indigo. Lapis lazuli specimens are usually highlighted with white and gold streaks.

Ideal lapis lazuli is a medium to dark blue with deep saturation. The most coveted types have a uniform hue with few traces of white calcite, though a sprinkling of pyrite is acceptable. As an opaque jewel, it’s rarely faceted, but cut into cabochons, carved into beads and used to create fanciful images such as scarabs, animals and religious figures. Though its used to adorn all forms of jewelry including rings and bracelets, lapis lazuli has a modest Mohs hardness of 5 to 5.5, requiring caution.

One of the most famous examples of lapis lazuli in art dates back thousands of years. The funeral mask of the pharaoh Tutankhamen is a monument of craftsmanship. Along with its base of yellow gold, the mask is decorated with enamel and contains a large number of jeweled inlays. Lapis is used to highlight the eyes of the pharaoh.

Up until the middle ages, lapis lazuli was often referred to as sapphire. Hence, for a time lapis lazuli was considered to have many of the mystical properties of sapphire, which was later transferred to the blue corundum. Ancient descriptions of sapphire as a stone with gold streaks is due to the naming quirk.

Lapis lazuli has featured prominently in fine art. Not only is it still carved into mosaics, vases, statues and other three dimensional art, lapis has also been in paintings. Between the 6th century ACE and 1828, the brilliant blue pigment known as ultramarine was made from mixing ground lapis lazuli with melted wax, and kneading the mixture in lye several times to remove impurities. Due to the cost of the gemstone and difficulty of grinding it into the fine consistency needed for painting, ultramarine was often reserved for coloring the most holy of imagery. Synthetic ultramarine was developed in 1828, allowing more lapis to be used in other applications.

The jewel is said to encourage interpersonal relationships. Lapis lazuli may be seen to represent friendship and truth. The stone also has the power to encourage harmony between others and help its wearer speak freely. Dreaming of lapis lazuli may indicate faithful love.

Despite some name confusion, lapis lazuli is always lapis lazuli, even when it was called sapphire. Much of the lore attributed to lapis has, now applies to blue corundum. This doesn’t erase lapis lazuli’s bright history in the arts. From statues, masks and paintings, lapis had made appearances both prominent and subtle.