Diamonds are prized for their ability to reflect light. This is most celebrated in brilliant cut diamonds, which combine brilliance, fire and luster to showcase the jewels bright qualities. While step cut diamonds aren’t as bright, they still showcase the beauty of the diamond crystal. 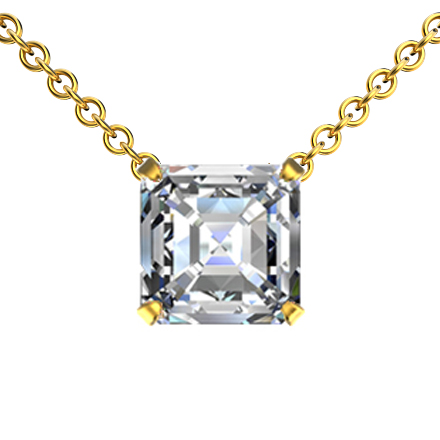 Step cut diamonds are square or rectangular diamonds with a faceting style distinct from brilliant cuts. Their tables and culets, or upper and bottom most facets, are broad while other facets on the jewel are downplayed. Facets sit parallel to one another, emphasizing a geometric look. The interior of the diamond is highlighted, with less brilliance to distract from the view.

One of the major benefits of step cut diamonds is carat preservation. Round brilliants must sacrifice large amounts of rough to achieve the symmetry and proportion needed to optimal light return. Certain fancy cut diamonds may also require greater carat loss, depending on the shape. Step cut diamonds, with their square or rectangular forms, have similar outlines to certain types of diamond rough. This in turn leads to greater weight retention during cutting.

Step cuts were especially popular during the early 20th century. Jewelry with geometric designs were in high demand, and the simple lines and bright luster of step cut diamonds coordinated with the aesthetic. Step cuts lent themselves well to downplayed designs with clean lines, or could be matched with many other jewels to create intricate styles.

Well known step cut diamonds include the emerald cut, the Asscher cut, baguettes, and more. Each of these diamonds have special features, and pair well with other diamond cuts, be they brilliant or step. Quality factors all step cuts have in common include an increased emphasis on luster. Since their brilliance is not as prominent as other diamond cuts, their surface gleam takes on greater importance. Look for a step cut jewel with strong polish. The interior of the gem is also highlighted, so step cut diamonds with a high clarity rating are strongly recommended.

Asscher Cuts
Not many diamond cuts can pinpoint the year of their debut. Asscher cut diamonds are two of the few that can definitively say when they were made. Both are square diamonds with cropped corners and a standardized number of facets. They also have a similar appearance when viewed face down, a series of concentric squares united by a single X.

The cuts get their name form the Royal Asscher Diamond Company, a generations old jewel firm from the Netherlands. The older cut, known simply as the Asscher Cut, was created in 1902 as a way to retain carat weight. This diamond has 58 facets, with three rows each on the upper and lower halves of the stone. Its patent expired in the 1940s, allowing other jewelers to use this cut.

In 1999, the Royal Asscher cut premiered. The newer cut was created as a homage and update to the original. This design features eight additional facets each to both halves of the diamond, adding brilliance to the step cut jewel. Its facets are also narrower than its predecessor. The Royal Asscher cut is currently under patent.

Emerald Cuts
Emerald cut diamonds are rectangular jewels with cropped corners and prominent table and culet facets. The focus on this diamond cut is less on brilliance and more on luster, color and clarity. This diamond cut is commonly used as a central jewel in diamond engagement rings, pendants, earrings and other pieces.

The diamond cut gets its name from another gemstone, the emerald. This colored gem is known for its many clarity characteristics that add to its appeal, but make it a fragile stone. Emeralds are typically cut as rectangles with cropped corners to maximize rough, showcase its internal characteristics, and reduce the risk of damage. Even when this cut is used on other stones, it’s known as an emerald cut.

While diamonds are harder than emeralds and have different structural quirks, the cut suits diamonds well. While cutters try to preserve as much diamond rough as possible, some cuts better lend themselves to weight retention than others. The shape of emerald cuts, when paired with certain types of diamond rough, is better able to preserve carat. The cropped corners also help protect diamonds where they’re at their most vulnerable.

As the emerald cut is designed to showcase the interior of the crystal, clarity is an important consideration. When looking for an emerald cut diamond, try to aim for a stone with a high clarity grade. An alternative is to seek out jewels with clarity characteristics that one finds appealing, like discrete flecks of garnet, or a cloud in a whimsical shape.

Color is also underscored in an emerald cut diamond. Those who prefer not to have a visible tinge to their jewels may wish to select gems with a high color grade. Other possibilities include choosing a setting, such as yellow gold, to downplay tint and make the stone appear lighter. 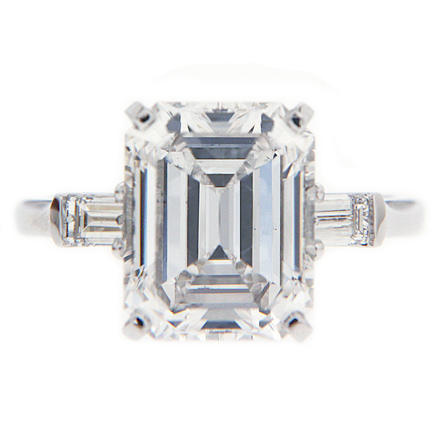 Baguette cut diamonds are thin step cut jewels. They are rectangular and frequently made on the small side. Baguette diamonds are rarely used alone, but are paired with other diamond cuts or more baguettes to create a variety of visual effects. The stones paired with step and brilliant cuts alike.

The word “baguette” derives from the French, and indicates a long skinny shape. Older versions of the cut have appeared in jewelry at least as far back as the 1550s, where they were used as part of complex designs. These diamonds were probably derived from cleaving stones into progressively smaller pieces before the final faceting.

Today’s baguette cut diamonds may be formed from rough that’s difficult to shape into other cuts. Diamonds’ popularity and value encourages making the most of available carat. Rough that would be a challenge to transform into a round brilliant or larger pieces can be turned into baguettes with less difficulty and sacrificed carat.

A common use for baguette cut diamonds is as a side stone, highlighting a larger, centrally mounted jewel. Most often, pairs of baguettes will be used to flank the central stone. They may be set parallel to the jewel, or perpendicular with straight or tapered sides. Other uses can include baguettes as haloes, framing the central gemstone.

When baguettes are the featured cut on a piece of jewelry, multiple stones are often used to create designs. This can include baguettes of the same length, or combining longer and shorter pieces to make the desired image. These can be as simple as diamonds lined up side by side, making a checkerboard pattern, or even using the jewels to form initials.

Unsung Step Cuts
The best-known step cut diamonds include the emerald, Asscher and baguette cuts. Other step cut diamonds exist, though they often don’t receive as much attention. All diamond cuts have their aesthetic appeal and should warrant a closer look. Among the less well known step cuts are the triangle, shield, trapeze and square.

Triangular step cut diamonds should not be confused with their brilliant counterparts, also known as trilliants. The step cut versions may not have parallel sets of facets, but they sit in concentric rows to one another, with a greater emphasis on clarity and color. Triangular diamonds are often used as side stones on diamond engagement rings, though they are also mounted as central jewels.

Trapeze diamonds are four sided stones with one set of parallel lines. Other names include trapezoid or trap cut diamond. Like triangles, they come in both brilliant and step cut versions. Trapeze diamonds are most often used as side stones on diamond rings, with their longest edge against the central jewel.

Shield cut diamonds resemble triangles with a tip cut off, forming a pentagon with uneven sides. The stone is usually mounted with its flat side pointing up, resembling its namesake. Depending on how it’s cut, the diamond may be brilliant or step cut, with pointed or cropped corners. This diamond cut may be mounted as a central jewel. When utilized as a side stone, its flat end usually rests against the center stone.

Asscher cut diamonds are not the only square shaped step cut jewels. Other square step cuts may have differing standards when it comes to the number of placement of facets, leading to appearances distinct from Asscher cut diamonds. Another difference may be the presence of corners. Asschers always have theirs cropped, though this may not be the case with other square diamonds. Square step cut diamonds can be used as central jewels, or may be side stones in jewelry such as three stone diamond rings.