The Process of Diamond Formation

Diamond Formation
As with many gemstones, diamonds are formed as a result of geological activity. The conditions that leads to the creation of diamonds are very specific, requiring the right environment and materials. They take shape between ninety and one hundred and forty miles beneath the earth’s surface, in the upper mantle. The earth underneath thick, geologically stable landmasses known as cratons provide the intense pressure needed to help diamonds take shape.

The chemical formula for diamonds are pure carbon, meaning its presence is essential to create the stone. Diamonds take shape if there are one of two rocks nearby to provide the element. Peridotite originates in a molten state before gradually cooling, and is the more common diamond host of the two. Eclogite is closer to the earth’s surface, but is pushed down over time, providing an environment for diamonds.

Volcanic eruptions may produce vertical pipes made of rock known as kimberlite or lamproite. On rare occasions, diamonds are transported along with magma to the earth’s crust. Speed is of the essence, as is the accompaniment of expanding gasses. Diamonds with long term exposure to high heat and lower pressure convert to graphite, another carbon mineral with a very different atomic structure.

Diamonds don’t often reach the surface, or are mixed in with other rocks, leading to mining activity to find them. The concentration of diamonds to host rock is miniscule. The majority of kimberlite deposits contain no diamonds. Of the ones that do, only a small fraction contains enough stones to make mining profitable. Tons of ore must be processed to provide a single jewel. These factors help to explain the rarity of diamonds.

Early Diamond Testing
For centuries, academics tried to determine the composition of diamonds. Plato felt that diamonds came from the stars, while a medieval Italian text stated diamonds were related to thunder. A chemist from the Baroque era, Robert Boyle, believed that diamond’s transparency was a sign it was made of clear water.

It wasn’t until 1772 that diamonds’ building blocks were discovered. The French scientist Antoine Lavoisier proved that oxygen was necessary for combustion, which in turn influenced his diamond experiment. After placing a diamond in a glass oxygen chamber, he concentrated sunlight onto the jewel, burning it. Carbon dioxide was the byproduct. In 1797, British chemist Smithson Tennant published a paper regarding a similar trial, confirming Lavoisier’s findings.

Today, people still test diamonds to confirm their authenticity, though less destructive means are used. A stone’s luster, specific gravity, refractive index and other factors may be examined to determine its identity while keeping the jewel intact. When diamonds undergo certification, among the first tasks performed is to confirm that they are diamonds.

Diamonds in the Water
Diamonds may be found in a variety of locations. Primary deposits contain diamonds mixed within kimberlite or lamprolite pipes, which carry the stones to the earth’s surface. Diamonds found away from their host rock are secondary deposits. Of these, there are multiple categories, including those found on land, in rivers and in the sea.

Due to the specific environment needed to create diamonds, they don’t form beneath the ocean. The immense pressure required to turn carbon into jewels occurs beneath thick portions of land. Marine deposits occur when erosion removes host rock, sending diamonds into streams, which then carry the stones into the sea.

Loose diamonds have a tumultuous experience in the ocean. Currents and other forces in the water send jewels colliding with sand, rocks and other materials. Industrial grade diamonds, which are more likely to contain imperfections, have trouble withstanding these circumstances. Gem quality diamonds, which tend to be sturdier, can last for a much longer time in the sea. Marine deposits are more likely to have high quality diamonds.

The earliest diamond mines arose from secondary deposits such as streams and dried riverbeds. It wasn’t until recent years that the number of diamonds mined directly from volcanic pipes outnumbered those from other locations. However, starting from the late twentieth century, there’s interest in diamonds washed into the sea. This is due in part to the higher concentration of gem quality stones. 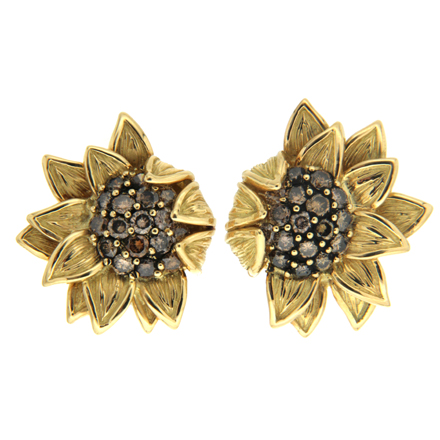 The majority of diamonds have little to no color. While they may have traces of yellow or brown, the lighter the diamond, the more it’s prized. Fancy diamonds, with hues outside the regular D-Z color scale, are an exception. Even then, some colors are more in demand than others. For years, brown diamonds were unpopular for jewelry and used for industrial purposes.

The Argyle mine in Australia is known for unearthing some of the world’s rarest diamond hues. It also produces a high quantity of brown diamonds. Though there is a market for industrial diamonds, fancy colored gemstones have a greater value. From the 1980s onwards, faceted brown diamonds were advertised under names like “cognac” or “chocolate,” highlighting the luxuriousness of the jewels.

The reputation of brown diamonds were probably aided by diamonds both big and small. Tiny brown diamonds, cut in India, were affordable for designers and connoisseurs. Two brown diamonds, the Golden Jubilee and the Incomparable, were both found in the 1980s. These jewels hold the world records for the second and third largest faceted diamonds.

Golconda
The first diamonds mined originated from India. The Golconda region in the south was especially abundant, producing stones for almost two thousand years. Many famous diamonds, from the Tavernier Blue to the clear Koh-i-Noor were first discovered in Golconda. During the voyage where he purchased his namesake diamond, jewel merchant Jean Baptiste Tavernier wrote “Six Voyages” detailing the region and its treasures.

One of the notable qualities of Golconda diamonds is their type. Over ninety percent of diamonds fall under Type I, the category of stones with traces of nitrogen mixed into the carbon crystal structure. Golconda diamonds are often Type II, allowing for unusually colorless diamonds. The most famous fancy colored diamonds from the region are blue, pink or green, and get their hues from traces of boron or other factors than nitrogen.

Up to 60,000 people at a time were employed in the mines. Jewels were removed from the ground instead of sifted from rivers. Techniques included open pit and tunnel mining, depending on terrain. Of the Golconda mines, the Kollur Mine was especially abundant, productive during the sixteenth to nineteenth centuries. Many of the famous stones from the region come from Kollur, including the aforementioned Koh-i-Noor and Tavernier Blue.