The chemical formula for diamonds is pure carbon. Its structure consists of a series of five atom units bonded together. Many diamonds however have quirks in their crystal. These include vacancies, or gaps where an atom should be, or traces of other elements replacing some of the carbon. Such differences are organized into diamond types, though some diamonds don’t neatly fall into these categories.

The vast majority of diamonds fall under Type I, which contains traces of nitrogen. There are multiple subsections of Type I diamonds, each concerning how nitrogen manifests within the diamond. Type Ia diamonds have clusters of nitrogen among the carbon, with subsets IaA and IaB categorizing two kinds of groupings. Diamonds with single nitrogen atoms are Type Ib.

Type II diamonds don’t have nitrogen, but may have other materials. Those that have no trace elements, but are chemically pure, fall under Type IIa. Type IIb diamonds have hints of boron in their crystal structure. Still more diamonds lack easy categorization.

In 2014, the Gemological institute of America reported examining a diamond with Type Ia properties. Spectrometer tests revealed results typical of Type IaAB diamonds, though the diamond had traits of other Type Ia stones. Closer inspection revealed that the diamond was a mixed type, containing a blend of IaA and IaB nitrogen expressions.

When diamonds are graded, the type is rarely listed. However, diamonds with unusual chemical composition such as mixed types have additional factors to help with identification. This may appeal to connoisseurs who desire jewels which stand out from others. 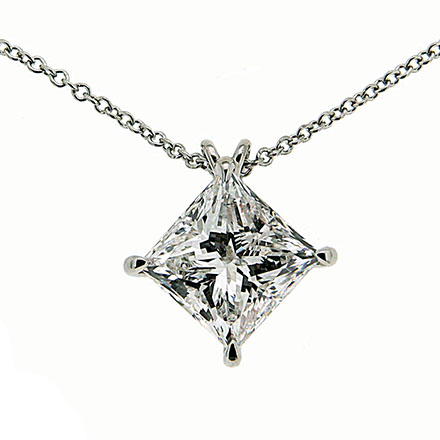 To unlock the full beauty of a diamond, the jewel should be cut. There are many ways to fashion a diamond, with the round brilliant being especially popular. Other methods include step cuts, which highlight a jewel’s clarity and color. Some styles combine the two approaches, and are known as mixed cuts.

Princess cut diamonds, also known as square modified brilliants, are square shaped jewels with a blend of step cut and brilliant style faceting. The crowns are often short, while the pavilions have much of the mass. When viewed face down, the stone features multiple chevrons forming an X. The number of chevrons usually ranges from two to four, depending on the cutter.

Radiant cut diamonds are rectangular diamonds with cropped corners. The gem’s crown usually has step cut facets while the pavilion is brilliant cut. Radiant cuts are able to concentrate the light inside a stone, disguising clarity characteristics. It’s also used to lighten or intensify the color of a diamond to a more desirable appearance.