Diamond formation and delivery to the earth’s surface is a fraught process. Many factors must come together to produce a jewel and bring it to the earth’s crust with minimal changes. For these reasons and others, mined diamond rough is more likely to be modestly sized. Gem rough measuring over one hundred carats is rare, and garners attention and curiosity. 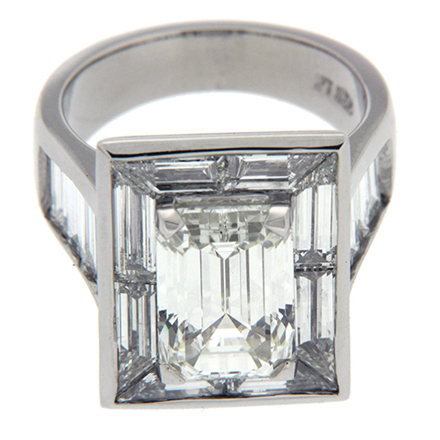 Large diamond rough and fashioned diamonds make records in many fields, including mining, cuts and sales. Botswana’s Lesedi La Rona diamond, unearthed in 2015, is the second largest gem quality rough ever found. Many named cut diamonds, such as the Star of Sierra Leone, weigh over one hundred carats, and jewels like Golden Jubilee and the Cullinan I, are larger still. At auctions, sizeable diamonds sell for millions. Between rarity and demand, sellers anticipate high prices for massive jewels.

In an effort to meet demand, mining companies are making greater efforts to find stones measuring one hundred carats or greater. This has included reopening the Letseng diamond mine in Lesotho, a facility that produces comparatively few jewels. The ones that are found are more likely than other places to be over 100 carats. Other efforts to produce massive diamonds include developing technology known as autogenous, which processes kimberlite with less pressure.

One hypothesis is that mining techniques which involve steel jaws and other crushing mechanics is best suited for rough 25 carats or smaller. Diamonds of great size are thought to more likely to be damaged, or reduced to smaller pieces when run through the machines. Improved stone identification before processing as well as autogenous technology is hoped to increase large rough yield.

From D-Z to Red

Most people think of diamonds as white or colorless gemstones. The majority of diamonds fall under the D-Z scale, which measure their degree of tint. Many display hints of yellow or brown, with some stones displaying subtler hues than others. About one diamond out of ten thousand exhibits a color unusual or intense enough to fall outside the D-Z scale.

Diamonds are idiochromatic, with colors coming from a source other than their inherent structure. This is most often expressed through trace elements such as nitrogen, exposure to naturally occurring radiation, or vacant spots in the crystal structure. Different quirks produce different colors. Red, which is caused by deformations of the diamond lattice, is extremely rare.

The desire to know what gives diamonds their colors have led to multiple experiments. Among the earliest was when physicist Sir William Crookes exposed diamonds to radium in 1904, turning the jewels green. Other tests over the years have experimented with different types of radiation, which can induce different hues. Depending on the jewel’s lattice, applying intense heat and pressure can change diamond color by closing vacant patches or altering what hues the diamond reflects.

In 2009, the Gemological Institute of America examined a red diamond which was previously D-Z. The jewel had undergone a multistep transformation, including time under immense pressure and heat, then irradiation followed by annealing. Afterwards, the diamond featured lattice vacancies. It also bore color centers not found in naturally colored diamonds, giving the now red-stone a purplish tinge.