How are Diamonds Cut

From Points to Tables

The earliest diamond cuts bear only the faintest resemblance to diamond cuts today. A combination of limited technology and differing tastes impacted the brilliance of the jewels as well as their shape. When aesthetics changed, preexisting cut diamonds would be remodeled into newer forms.

The point cut closely follows the outline of rough octahedral diamonds. Both are eight sided, with triangular faces and a square girdle. When set, a point cut terminates into a tip rather than a level top. Point cuts improved upon the original stones by sporting sides with its imperfections polished away. Distinguishing a point cut from well-formed rough can be difficult.

Unlike modern diamond cuts, the point cut displayed little brilliance or clarity. The jewel’s relation to light was little understood, and technology made cutting a challenge. Point cuts focused more on the jewel’s luster and attaining a pleasing shape. Brilliance was a later development.

During the Renaissance, another diamond cut rose to popularity. Called a table cut, it appeared during the mid to late fifteenth century, and resembled a point cut with a flat square surface. Even though its faceting was very simple, it provided more brilliance and fire than the earlier style. Table cut diamonds and their early brilliance were in enough demand that many earlier point cuts were remodeled into the newer type.

Most diamonds are cut and mounted so there’s a large flat plane at the very top of the gem, known as a table facet. When referring to diamonds, the table may be indirectly referred to as “face up.” No matter the cut of the diamond, the table has a strong influence on diamonds’ aesthetics and how they’re made. 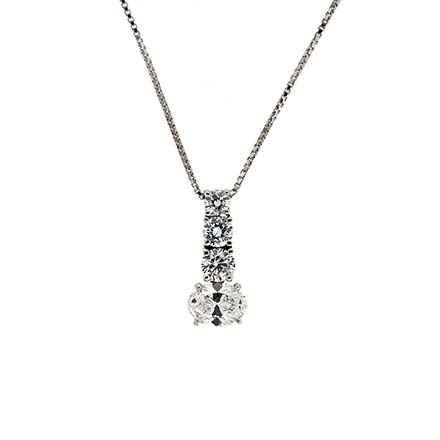 Brilliant and mixed cut diamonds are fashioned so light exits through the table, appearing as brightness to the viewer. Fire has the challenge of ensuring colored light doesn’t recombine into white upon leaving the table. Brilliance, fire and scintillation are evaluated on their face up appearances

Even distribution of light creates greater brilliance in a diamond. When a jewel’s cut is graded, symmetry is one of the factors examined. One of the elements of symmetry gemologists look for is whether the table is centered on the crown. Table size is another consideration for grading, with standards advising a diameter slightly over 53% for ideal brilliance.

Some diamonds feature a grey circle under their tables, a reflection of the girdle known as a fisheye. Another shadow visible face up is a dark patch beneath the table called a nail head. While such large dark spots are not the most desirable, diamonds do benefit from face up shadows. Scintillation, or the play of light and dark that travels through the table, helps add contrast to brilliance, making white light further stand out.

When examining a diamond for clarity characteristics, the size and number of characteristics influence the final grade. Where the inclusions and blemishes are located also matter. Clarity characteristics that are visible under the table may be more apparent than those positioned elsewhere. This may be a greater detract from the gem’s appearance, or serve as a point of interest, depending on the nature of the characteristic.