Diamonds from Light to Dark

Developments in Medieval Europe allowed diamond polishers to do more than clean and even the sides of diamond rough. With advances in equipment, jewelers were able to facet their stones, creating table cuts and old single cuts as well as square and rectangular diamonds. Paintings up through the Renaissance period continued to show diamonds as dark stones. It wasn’t until the Baroque era in Europe that cutters were able to unlock diamonds’ internal brilliance. 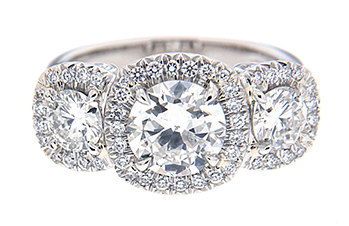 To preserve carat weight, this newer cut, later known as a cushion cut diamond, followed the original outline of the rough. While symmetry and a round jewel were ideal, cutters from the 17th to early 20th century often focused on preserving size rather than increasing brilliance, making shapes that were between an oval and rectangle. It wasn’t until 1919 and the advent of the round brilliant cut diamond that current bar for brilliance and fire was set.  The beauty and resilience of diamonds have captured the imagination of scientists and artists alike for thousands of years. Before advances in geology, academics had a variety of hypothesis about how diamonds were formed. Plato believed that diamonds were the byproduct of stars, while Italians in the 14th century felt that thunder was responsible for creating the jewel. Robert Boyle, a noted 1600s chemist, felt that since diamonds were transparent, they must be made from clear water.

When not pondering the origins of diamonds, people created legends around the stone’s strength and clarity. Many believed that by wearing the jewel, they would gain special abilities. The intense hardness of a diamond could help reinforce the willpower of its wearer, enabling them to resist evil influences, or use its transparency to turn invisible. The most enduring legend of diamonds is their use in engagement rings. From 1475 onward, to wear a diamond engagement ring was to have a love that could withstand anything.

Diamonds are one of two minerals made of pure carbon, the other being graphite. While the latter is made from the immense heat and pressure of two pieces of the earth’s crust pressing against one another, diamonds are born within the mantle. The forces about 100 miles beneath the ground forces carbon into a distinctive octahedral shape. Volcanic eruptions bring rough diamonds closer to the surface, allowing humans to mine for the precious stones.

After a diamond is unearthed, it passes between many hands, including a cutter who tries to bring out the best in the stone. The most popular cut of diamond is the round brilliant. Though the first modern round brilliant cut diamond appeared in 1919, jewelers have spent centuries trying to develop the brightest diamonds possible, and continue to do so to this day. Along with the round brilliant cut diamond, other popular modern cuts include the radiant, princess and heart shape. While many in-demand diamond cuts emphasize brilliance and fire, a handful such as the emerald cut are designed to showcase a diamond’s color and clarity.