The original princess cut appeared around 1980, in the form of a square brilliant made with 90 degree angle corners, giving it a perfect square shape. In 1981 the Quadrillion was created, a precision cut square brilliant with 49 facets and a star shaped pattern on the pavilion. The modern princess cut consists of 58 facets similar to those of a round brilliant diamond.

Some History about the Princess Cut

This diamond’s connection to the French cut comes from the princess’ square shape and tendency to form an X when viewed from the top. The number of facets in a French cut varies, though all lack the brilliance and prismatic colors a princess cut diamond produces. Refraction, fire and scintillation connect the princess to round brilliant diamonds, which produces similar light shows.

There’s no fixed number for the amount of facets a princess cut diamond may have. Depending on the creator, a princess diamond may have forty nine, fifty eight or more facets. The number of chevrons placed in the pavilion may range from two to four, making a dramatic impact on its ability to shine. What all princess cuts have in common are a square top that leads down into a four sided pavilion, like an upside down pyramid.

One of the influences of the princess cut’s popularity is its economical use of weight. In their rough state, diamonds resemble two four sided pyramids joined at the base. To make a round shape, a diamond cutter may sacrifice up to 50% of the rough. Princess cuts are already square, reducing the need to remove rough to achieve the desired outline. A beautiful stone is born while preserving much of the crystal.

Though new to the world of diamonds, princess cuts have a notable ancestry. More importantly, their play of light is comparable to other brilliant style diamonds. Princess diamonds may show a modest or exceptional brilliance, depending on the number and style of faceting. Their variety and weight retaining abilities give princess cut diamonds a place of pride among connoisseurs.

Princess cut diamonds made their debut in the 1960s from Arpad Nagy of London, and made another appearance in 1979 through Israeli jewelers. The jewel is square shaped, with a broad table and a pavilion like a four sided pyramid. There may be 49, 58 or more facets, and the number of chevrons in the pavilion may range from 2-4, depending on the size of the jewel and desired aesthetics. A 49 facet princess cut diamond has 20 facets between the table and girdle, and 28 on the pavilion. 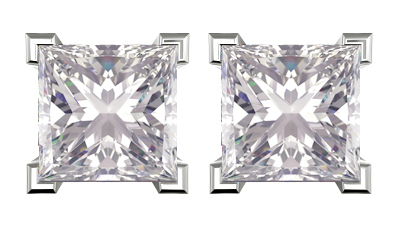 When choosing a princess cut diamond, take care to ensure that the sides of the pavilion are straight, not curved or uneven. The four sides of the girdle and table should be of the same or very similar length, meeting one another at right angles. Facets should be symmetrical for the best brilliance and scintillation, with no disproportionate or extra facets unbalancing the brightness. Princess cut diamonds usually don’t have a culet or cut corners, making proper mounting crucial. V shaped prongs are ideal for keeping your princess cut diamond safe.

The French cut is a style of diamond that was in vogue between the 15th and 18th centuries, with a revival in the 1920s and 30s. It’s a square shaped jewel with four sloping sides and nine upper facets, totaling thirteen in all. While the cut is able to reflect light, its brilliance is closer to a step cut than a brilliant cut diamond.

Depending on the design, princess cut diamonds can have between 48 or 58 facets. The bottom half of the diamond may contain two to four sets of chevrons to give off brilliance in bold flashes or subtle sparks. While there is no hard and fast rule for the number of pavilion facets, some buying guides recommend fewer chevrons for the tiniest princess cut diamonds to avoid splintery looking brilliance.