Depending on the cut, a diamond can have a pointed bottom, or a flat lower facet parallel to the table, known as a culet. Its purpose is frequently utilitarian, preventing a potentially vulnerable tip from chipping. This feature has a limited influence on brilliance and may not appear in more popular diamond cuts. It’s a more common feature on certain historical cuts. 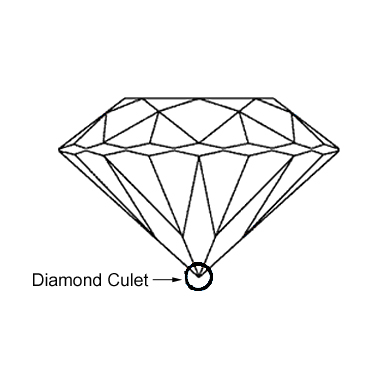 With round brilliant cut diamonds, culets are optional. People concerned about their round brilliant’s durability may want to look for a stone that features this facet. When viewed from the top of the jewel, the culet should be discrete rather than immediately apparent. There should be a balance between the facet being defined enough to protect the jewel, but small enough not to detract from the cut’s aesthetics.

Emerald cut diamonds contrast from round brilliants in many ways. The latter is brilliant cut, designed to reflect white and prismatic light, while the former is step cut, made to highlight the crystal itself. Their faceting styles are quite different, with emerald cuts favoring parallel sets of facets on the sides of the jewel. To show off the interior of the diamond, the table and culet of the emerald cut are broad, providing a clearer view into the stone.

Some culets show prominently in antique cuts. One of the earliest example is the table cut, which resembles an eight-sided diamond rough with a tip removed to provide a rectangular table. During the Renaissance, a popular variant was to make a small rectangular culet. When the jewel was viewed face down, the result was nested geometric shapes. Predecessors to the round brilliant such as old mine and old European cuts feature other examples of large culets, though these facets are rounder in form.

Rose cut diamonds may be thought of as upside down jewels. Most cuts have a broader top and narrower bottom. The upper portion of a rose cut diamond is made of several small facets that terminate into a peak rather than a flat table. Its bottom is made entirely of a culet, forgoing other parts of a pavilion.