A Look at a Versatile Cut

Baguette diamonds are small thin diamonds rectangular in shape with straight or sloping sides. The jewels are step cut, emphasizing color, clarity and luster over brilliance. Baguettes are a popular cut for diamond rings, often appearing as accents. Other designs use them as the primary stone.

Side stones flank a larger jewel, adding shine to the overall ring. Straight sided baguettes may lie lengthwise along the shank or parallel to the finger. If the latter, designers may use multiple baguettes of graduated sizes to create a pyramid effect. Tapered baguettes are also set lengthwise on the band. 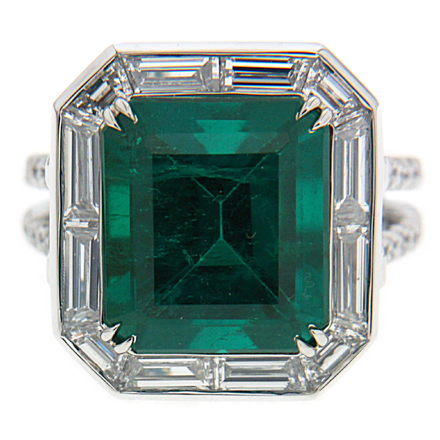 While round diamonds are the most popular choice for halos, baguettes are also common. Due to their shape, straight sided ones are more compatible bordering rectangular and other geometric stones. Tapered baguettes are less likely to appear as halos, but are used with striking results. Their shortest ends are set against the larger stone, creating a radiating effect. Those who want unique engagement rings may want to consider baguette halos.

Some designer engagement rings and wedding bands are made entirely with baguettes. The stones may be laid lengthwise along the band for a sleek appearance. Baguettes set perpendicular to the shank are more common, and appear in styles like diamond eternity bands.

When set with other cuts, baguette diamonds make striking rings. Alternating baguettes with round diamonds is one approach. One variation is setting two baguettes together to form a square, and setting them between ovals. Other methods include placing a row of round diamonds between lines of baguettes. To find more looks, please visit our Custom Diamond Collection at valentinmagro.com