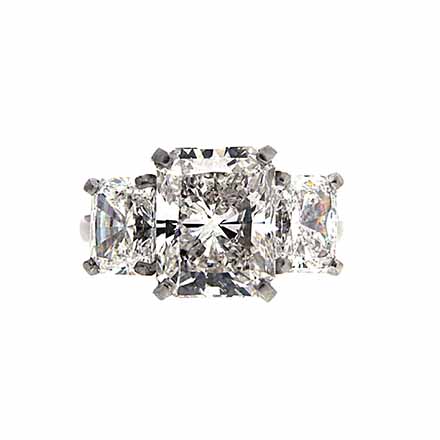 Since the Roman Empire, women have worn engagement rings as a sign of their upcoming marriage. What used to be iron bands transformed over time into precious metal rings. Gemstones make a frequent appearance, especially diamonds. Modern rings can be quite extravagant. Most follow a few themes.

Diamonds are the gemstone of choice for designer engagement rings. The stone’s hardness represents unbreakable love. They’re also valued for how they catch the light. Many cuts are devoted to unlocking as much brilliance from the gem as possible. Others showcase the crystal itself. Modified cuts combine brilliance with whimsical shapes such as hearts.

One enduring style is the solitaire diamond engagement ring. It originated in the 1880s as a cushion cut ring with six prongs. Solitaires are now available in every cut imaginable, from hearts to Asschers and round brilliants. Multiple settings are also used, including cathedrals, bezels and antique mounts.

Three stone diamond rings are another popular design. It gets its name from the three jewels of the same cut mounted on top the ring. Two gemstones are the same size and the middle one is larger. This style is said to stand for the past, present and future of a couple. These rings are often prong set, and may be decorated or left plain as the wearer chooses.

One of the most popular embellishments is a border of tiny diamonds around the main gems. These are known as halos. They add brilliance to the ring and provide the illusion of greater size. Though some halos are made of rectangular diamonds, most are round. Rings with multiple diamonds may have all their rings bordered, or just one for effect.

Pave settings are another decorative technique. Like halos, they use small jewels, but pave covers portions of the ring rather than edge other gems. Pave may take the place of side stones, or cover the shank. The brighten more of the ring then just the central stone, which may appeal to lovers of brilliance.

One possibility when choosing engagement rings is a wedding set. These are usually made of an engagement and wedding band. The two rings are designed to complement one another with similar cuts, settings and so on. Some jewelers offer custom design systems for stackable rings, allowing clients to make sets to their liking.