A new custom for engagements and weddings is to buy both rings at once. It’s also becoming popular to buy coordinating engagement and wedding bands. Wedding sets, a pair of matching diamond rings, fulfill both of these trends. One ring is meant to be worn during the engagement, and the other joins its companion during the wedding ceremony. After the wedding, the couple may solder the two rings together to prevent loss and to keep the jewels from rubbing against one another. 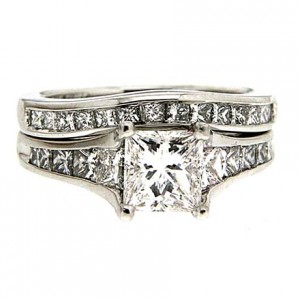 In a wedding set, one ring is usually more lavish than the other. The fancier band is worn as the engagement ring while its subdued partner plays the part of the wedding band. The two dominant styles of wedding sets include two rings of a similar design that look attractive when worn together or separately. The other version is a set that looks like a single ring split down the middle, leaving two bands that don’t look whole without the other. Worn together, a complete pattern emerges.

Engagement Rings and Wedding Bands, Together

Engagement rings and wedding bands are widely available, and often purchased separately. Some stores offer these romantic rings in groups of two or more, as suites. This can simplify life for some couples, by reducing the number of shopping trips. Another appeal to these rings are the designs which connect the bands.

A wedding set designed for one wearer may feature one engagement ring and wedding band. These pieces coordinate precious metal, diamond cut, and settings. One variation has two rings which resemble two parts of a whole. When worn together, they form a single large band. Another style has two matching yet distinct rings.

Sets designed for two people may be made of two or three pieces. The former may have wedding bands for women and men. These may be identical rings except for size, or have different designs with common motifs. Three band sets are made of one engagement ring and two wedding bands with similar styles.

After marriage, it’s common to wear engagement and wedding rings on the same finger, stacked on top the other. Some people may keep the rings separate, while others have them soldered together. The latter reduces the risk of the diamonds rubbing against each other. Still others may choose to wear just one ring after the wedding.