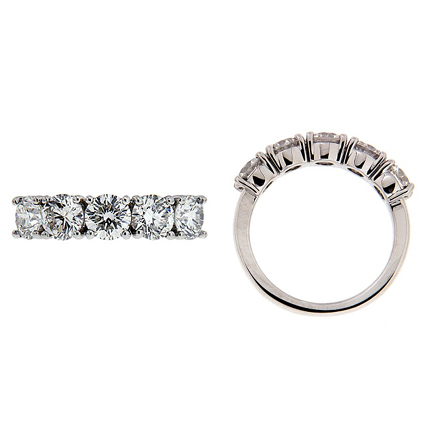 Engagement rings, wedding bands and anniversary rings have a long tradition. For thousands of years, spanning many cultures, rings and love were tightly linked. As time passed, new layers of meaning emerged. Today’s diamond bands celebrate many aspects of a couple’s devotion to each other.

The first engagement bands came from the Roman empire. Women wore rings of iron to signal their upcoming marriage. Eventually, they wore two, iron for indoors and gold for outside. Precious metal rather than iron became the choice for rings. In later eras, couples would incorporate romantic symbols on the bands, such as clasped hands or poetry.

In 1477, Archduke Maximillian of Austria gave his fiancé, Mary of Burgundy, a gift. It was the first known diamond engagement ring. He specifically chose the jewel for its durability, to show the strength of his feelings. This gesture made diamond engagement rings the choice love token for the elite. After centuries of deposit discoveries and improved mining, diamonds became more available. Even those of modest means could save for their own.

The first known wedding rings came from ancient Egypt. They were worn over the fourth finger of the left hand, believed to have a vein leading to the heart. Combined with the ring’s endless circle, wedding bands conveyed eternal love. Ancient Greeks and Romans adopted them as a sign of devotion, as did later cultures.

Anniversary rings are newer than their cousins. They came about as a way to commemorate happy years together. Diamond anniversary bands continue the tradition of using the jewel to represent lasting romance. Eternity rings combine the meaning of diamonds and the band’s circle to underscore commitment.