A Look Back at Anniversary Rings

As wedding bands mark a turning point in a couple’s life, anniversary rings commemorate the years together. While tradition names certain gifts to mark specific anniversaries, today’s couples give rings any year they choose. Diamond anniversary bands are popular, due to the jewel’s beauty and connection with love. 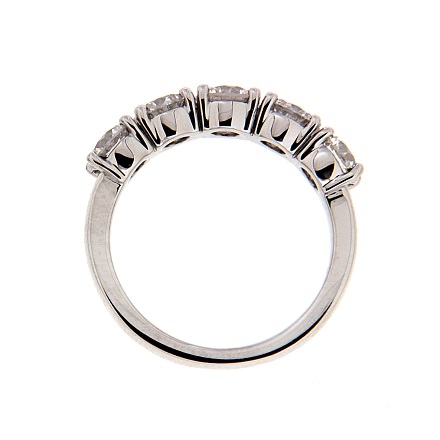 The earliest known anniversary gifts come from the Holy Roman Empire. After twenty-five years together, husbands gave their wives wreaths of silver. For fifty years, they gave gold wreaths. To this day, twenty-fifth and fiftieth anniversaries are known as “silver” and “gold,” respectively.

By the early twentieth century, the concept of anniversary gifts expanded. Lists abounded naming what presents went with which year. Different guidelines offered varying suggestions, such as paper or cotton for the first anniversary. Other lists followed specific themes, like flowers or gemstones. Today’s couples may follow these standards, or choose something more personalized.

During the 1960s, diamond eternity bands debuted. These rings feature a row of jewels surrounding the shank, forming an endless loop. Stones are usually the same cut and size, though some alternate diamond shapes. The advertising behind the ring’s premier promoted them as a way to celebrate time together.

Some couples may modify existing diamond wedding bands. The diamond on the original ring may be removed and set into a new band. Those who married on a modest budget may want to keep the band, but trade the stones for something brighter. If either is what you’re looking for, Valentin Magro specializes in custom orders.

Still more variations on anniversary rings include bands with five or seven diamonds. These stones are of the same cut and size, mounted close together. Other versions include three stone rings, said to represent the past, present and future of a couple. While their jewels have the same cut and are mounted in a row, the center gem is larger, standing out from the others.