Fancy Cut Diamonds for Your Ring

Since their debut in 1919, round brilliant cut diamonds have been quite popular, gracing countless diamond bands. Mixed cut diamonds, which blend brilliance with weight retention, are also favored by today’s connoisseurs. Modified brilliants, also known as fancy cuts, may also appeal to those who adore diamond’s bright qualities but want a less common shape.

Cushion cut diamonds predate round brilliants by centuries. They were first developed to help brighten the inside of a diamond without sacrificing too much weight. Older cushion cuts have different outlines and facet numbers. There’s still no standard way to create a cushion cut diamond, though brilliance is still ideal. They’re between a square and an oval in shape, and are good for those who want vintage style diamond engagement rings.

Heart engagement rings, wedding bands and so forth have romantic connotations. This cut is complex, featuring lobes, wings, cleft, belly and point. Ideal heart shaped diamonds should be symmetrical, gently rounded, and neither too long or wide. This shape is often used as central stones on diamond bands. 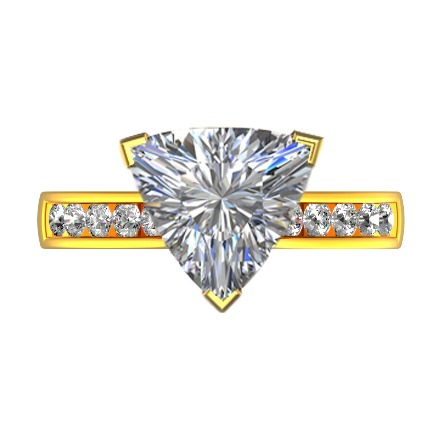 Marquise cut diamonds premiered during the mid-18th century. The cut resembles a long oval with pointed ends. It is said French King Louis XV commissioned the rings to resemble the mouth of the Marquise de Pompadour. The diamond is often worn down the length of the finger to lengthen the hand, and may be used as a side stone.

Oval shaped diamonds have been known since the 14th century. These brilliant cuts resemble stretched circles, with some narrower or wider than others. The outline of oval diamonds can make the jewels seem larger than their carat weight, making them ideal for the budget minded.

Triangle diamonds come in two versions. One is step cut, with rows of nested facets. The brilliant version is sometimes known as a trillion or trilliant, depending on the creator. Triangular brilliants are often equilateral, with defined points. They’re used as side stones, and appeal to those who want a unique central stone for their diamond bands.

Pear shaped diamonds are a mix between an oval and a marquise, with one rounded end and another which narrows in a point. The broad portion of a pear should have rounded shoulders, while the wings flanking the point should be subtly curved. As a central stone, pears are often worn with the tip facing the finger, though pear side stones may face other directions.

Part of the appeal of diamonds is how light bends and slows as it enters the jewel. When cut just so, the diamond’s reflective nature fills the stone with white light and flashes of color. Brilliant cuts strive to optimize light in a diamond. Mixed cut jewels aim to balance brilliance with carat.

Diamond cutters spent centuries aiming to better unlock brilliance from the gemstone. Tracing the history of diamond cuts shows developments in shaping. leading to stones getting brighter and brighter. Even now, there are efforts to improve existing cuts in order to increase the light within the jewels.

Round brilliant cut diamonds made their debut in 1919, as part of Marcel Tolkowsky’s doctoral research. In his paper, Tolkowsky outlined the shape, proportions, angles and other features needed to bring out then-unprecedented brilliance. Today, round brilliant diamonds are one of the most popular choices for engagement rings, wedding bands and other jewelry.

To achieve the greatest light in round brilliants, large amounts of carat must be removed. Along with cut, carat adds to the gemstone’s value. Mixed cut diamonds often have their lower portions cut in the brilliant style, with the upper portions made like a step cut. This approach makes the jewel heavier than it might have otherwise been.

Among the more popular mixed diamond cuts are princess and radiant cuts. The former is a square shape with defined corners and two to four chevrons in its lower half. Princess cut diamond rings are sought after for those who want a less typical look to their engagement rings. Radiant cut diamonds are rectangular with cropped corners. It’s known for intensifying light that few other cuts match.