Selecting Your Engagement Ring
When choosing a diamond engagement ring, there’s a lot to keep in mind. It’s a ring meant to be worn daily, and should be of a style its wearer enjoys. At the same time, engagement rings are a symbol of the bond between a couple. Its design should reflect the love they have for each other.

Diamond engagement rings are worn on a high traffic part of the body, leaving it vulnerable to bumps and other accidents. It’s important to select diamonds and other gemstones known for their durability. However, no jewel is invincible. Gemstones should be set in a way that protects them from harm. Aesthetics must balance security when choosing diamond bands.  Finding the right diamond engagement ring can seem daunting. There may be unfamiliar words and ideas used to describe gemstones and diamond bands. The more one knows about diamond engagement rings, the easier it will be to understand the choices available. 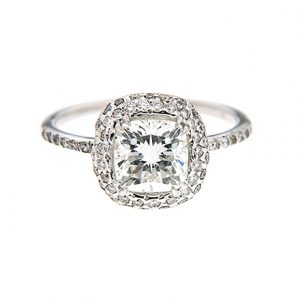 Diamonds are fashioned into a variety of shapes, ranging from the simple such as squares and ovals, to more complex outlines like hearts or crescents. Some shapes are more popular than others, with a few favored for design elements like side stones, while others are preferred for central jewels. A few, like square and round, are used for many aspects of diamond engagement ring design.

Round diamonds are quite common. The tiniest versions are used in pave settings, halos or side stones to help embellish a ring. Larger diamonds usually come in the form of round brilliant cut diamonds, one of the most popular diamonds for engagement rings. Round brilliants debuted in 1919, the culmination of careful research to make the brightest possible diamond. In the years since, jewelers have sought to improve on the original design, adding as much brilliance as possible.

Radiant diamonds are another mixed cut. They are rectangular with cropped corners and a reputation for strong brilliance. Radiant cuts may be used to improve the color or brightness of a diamond. These jewels are most often used as central stones in a diamond engagement ring.

Emerald cut diamonds are one of the most well-known of the step cuts, which emphasize clarity over brilliance. Step cut diamonds have parallel facets which form concentric rectangles and often have shallow pavilions. Emerald cuts are rectangular with cropped corners, originally developed as a way to cut fragile emeralds while displaying their clarity characteristics. With emerald cut diamond bands, jewels with high clarity grades are recommended.

Heart shaped diamonds are a variation of the round brilliant known as a fancy cut. Its romantic shape makes it a popular choice for engagement rings, wedding bands, and other jewelry associated with love. They are most commonly used as central stones in diamond bands, though they may also be used as side stones. When looking for a heart shaped diamond, make sure the jewel is symmetrical.

Cushion cut diamonds have been around for hundreds of years. They may take on a variety of shapes, but are often a mix between ovals and rectangles. Cushion cuts were developed as a way to attain brilliance while preserving as much carat weight as possible. They are still used today, mostly as central stones in engagement rings. Cushion cuts may be sought out by those who want a vintage style diamond engagement ring or desire a beautiful yet economical jewel.

Marquise cut diamonds, also known as navette diamonds, are a type of fancy cut. They are oval shaped, with the two ends terminating into points. Its length relative to its carat size makes the shape appear larger than its actual size. Wearing the stone parallel to the finger helps to make the hand look longer. Marquise diamonds are used as central jewels in diamond engagement rings, though they are also popular as side stones.

Like cushion cut diamonds, oval diamond cuts are hundreds of years old. Modern versions emulate round brilliants, showcasing how light reflects from their internal facets. As with marquise diamonds, oval cuts appear larger than their actual carat size. When looking for an oval cut for your diamond engagement ring, try to find one that is neither too wide nor too narrow, and is symmetrical both length and width wise.

Triangular diamonds come in two forms. One version is also known as the trilliant, and focuses on making the jewel as brilliant as possible. The second style of triangular diamond is step cut, highlighting the luster and clarity of the jewel. Both triangular diamond cuts are commonly used as side stones on diamond bands, adding shine to the central gemstone.

Baguette diamonds are long skinny diamonds which resembles bread of the same name. These rectangular step cuts are often produced in tiny sizes. Baguette cut diamonds are frequently used as side stones, halos and other decorative elements in diamond engagement rings. Some designs feature baguettes as the main stone, usually as many baguettes laid side by side.

Asscher cut diamonds were first developed in 1902 by the Royal Asscher Diamond Company. This jewel is a square step cut diamond with cropped corners and 58 facets. It reflects more light than an emerald cut, but still places a greater emphasis on luster than brilliance. A similar diamond cut, the Royal Asscher cut, premiered in 2001 and features 74 facets. The Asscher cut often appears on vintage diamond engagement rings, and is gaining the attention of modern connoisseurs.

Pear cut diamonds are a mix between an oval and a marquise, with one rounded end and one pointed. When worn as a central stone on diamond bands, they’re most commonly mounted with the point facing the fingertip, elongating the hand. As side stones, they’re often set with the tips parallel to the band, facing away from the central stone. 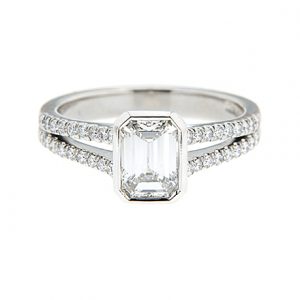 There is more to engagement rings than the diamonds. In order to set a diamond, there must be a place on which to mount it. Diamonds are most commonly set on or around the bezel, though they may be placed on other locations such as the hoop. Below is a closer look at the anatomy of a ring.

The band, also known as the shank or the hoop, is the part of the ring that encircles the finger. The shanks of diamond engagement rings are usually made of precious metals. Bands may be left plain, or receive subtle embellishments like a knife edge, step edge or domed edges. Other decorations may include grooves, engraving and pave settings which encrust the ring. Some couples may have the inside of the band engraved with their initials or the date of their engagement.

Variations on the band may include a split shank, where the band is in one piece on one side, but separates into two halves on the side of the ring which holds the diamond. Other rings may feature two or more diamond bands, intertwined to form a whole. Still more engagement rings balance a diamond between two slender shanks. Simpler band styles play with the width, creating a narrower or thicker ring according to the wearer’s tastes.  Shoulders sit near the top of the ring, on either side of where the central diamond lies. In terms of diamond engagement rings, the shoulders are where diamond side stones are set. Shoulders may also be left plain, or embellished by other means such as enamel.

The bezel is the top of the ring where the central gemstone is set. Often there is one jewel, sometimes with other stones decorating the shoulders and band. Some styles of engagement rings like crossover rings may feature a double bezel, with a gemstone on each. Tension set diamond engagement rings forgo the bezel entirely, suspending the diamond between the shoulders.

Whether or not they’re mounted with diamonds, the components of engagement rings serve as decorative elements. There’s the style of the band, how wide it should be, and what it should be made from. The shoulders may be left plain, decorated or mounted with stones. Knowing more about the elements of a diamond engagement ring will provide greater understanding of how beautiful they can be.