The tradition of wearing a ring to commemorate one’s marriage is an ancient one. Ancient Egyptians are believed to have originated the tradition, though the practice has been confirmed to happen in the Roman Empire. Just as old is the custom of wearing the ring on the left ring finger under the belief the finger holds a vein that leads directly to the heart.

In the present day, wedding bands are worn in many countries, from the Americas and Europe to parts of Asia. Women commonly wear wedding rings, and men increasingly do so as well. After marriage some people stop wearing their engagement rings, replacing them with their wedding bands. Others choose to wear both rings on the same finger, one on top of the other.

Preferred materials for wedding rings are gold, platinum and diamonds, though other metal and gemstones may be used. The rings take on many styles, from simple metal band to an elaborate diamond covered confection. 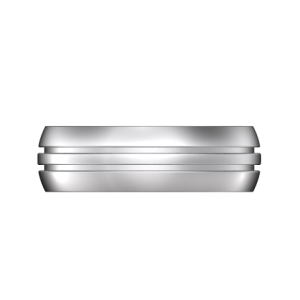 During most wedding ceremonies, the couple exchanges rings. Wedding bands are worn by people of all genders as a symbol of love and commitment to another. While a wide array of styles exists, wedding rings for men and women typically have different designs.

Wedding bands for women are likely to be on the narrower side. Common styles feature multiple small diamonds, often of the same cut, carat, color and clarity. These gems may be mounted side by side, or incorporated into other decorative elements, such as a crisscross band, scrollwork, or mille grains. Plain metal rings may feature subtle or overt embellishments such as a dome band or lacy motifs.

Men’s wedding bands tend to be wider. Some designers offer rings with diamonds, though others focus on all metal bands. The former may feature fewer diamonds than women’s rings, or choose jewels and settings that use gemstones as an accent rather than the main focus. Plain bands often feature understated details, such as brush polishes, hammer finishes or edgings.

Androgynous styles are also available. As with wedding rings for women and men, they’re available as both plain and diamond bands. Designs may be as subdued as any other ring, or feature embossing, scrollwork, or other overt decorations. Whether a wedding band is created with women, men or other ideas in mind, what matters is the wearer’s preference.