There’s an appeal to seeking out the newest, most cutting-edge designs for diamond engagement rings. Timeless styles are also enjoyable. It may be the idea of diamond bands which are always in fashion. There’s also the thought of emulating other happy couples.

Cushion cut diamonds are a mix of old and new. Its earlier versions aimed for sparkle while preserving carat. Today’s cushion cut engagement rings retain the squarish round shape of its predecessors. Its brilliance has been updated for modern tastes, but its classic feel remains.

Round brilliant cut diamonds were introduced in 1919. The stone’s unprecedented brilliance captivated the public. Soon after its debut, it appeared on engagement rings, wedding bands and other pieces. Even now, round brilliant diamonds are bestsellers. 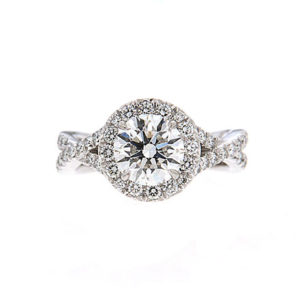 During the 1880s, one jeweler produced a line of solitaire diamond rings. The style features a brilliant diamond secured with six prongs, and remains popular to this day. Round brilliants and cushion cuts are the stones of choice for this design. Light travels through the prongs into the jewels, bringing more sparkle.

Diamonds are known for their pale shades. Many design eras, such as Edwardian and Art Deco, sought out metals which coordinated with the jewel’s icy tones. Platinum was and remains popular, both for its hue and ease of shaping. White gold engagement rings have a similar appearance, and are friendlier to the budget minded.

For centuries, gold jewelry had one color, yellow. Developments in technology introduced new hues of gold. The original tone is still sought out for its warmth and beauty. Yellow gold bands are a simple way to invoke an ageless look with your jewelry.

Nature is a constant source of inspiration for ring embellishments. Plant motifs in particular make many appearances. Sometimes it’s an antique band with a vine running down its length. Diamond wedding bands resembling a leafy garland may remind the wearer of Art Nouveau. With classic ring designs, what’s old always feels new.