Pearl, the Sacred Gem Born in the Blue

A member of the rare Crystal Gem family, a pearl is the natural embodiment of perfection. Born inside the shell of a living mollusk in the deep toughs of oceans, pearls are one of the rarest and most expensive of gems known to this planet.

Beauty
The surreal iridescence of pearls has been an enigma to people for centuries. Modern science unravels crystalline calcium carbonate to be the key constituent of pearl. Calcium carbonate deposits itself in concentric circles to form a pluperfect sphere which we call pearl. However, not all nature-born pearls are nacreous or rare. Only a select few and they are prohibitively valuable. To make up for the scant production of pearl in nature, jewelers now farm pearl in laboratories. 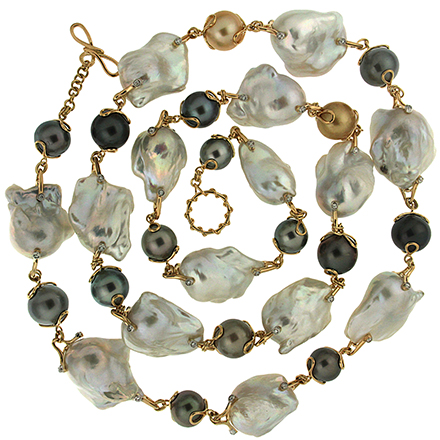 History
The history of pearl goes far back in time. Eons ago, mankind came upon the pearl for the first time while rifling through drifted oddments on a seashore for food. The tides, with a handful of twigs and leaves, washed ashore a tiny shimmering grain with an uncanny glow and iridescence. That was the first supposed sighting of pearl in human history and that day marks the beginning of men’s quest for this rare gem.

Religions and myths of civilizations around the world has mention of pearls. If legends are to be believed, the early Egyptians kept their pearls buried underground. Eventually, the pearl came to be woven in fantastical tales and folklores around the world. It is said that Cleopatra drank a pearl with her wine to win wager against her beau Mark Anthony. In popular cultures, pearl is seen as a symbol of beauty, wealth, perfection and even social standing. In ancient Rome, it was the symbol of riches. In Greece, pearl stood for high esteem and unrivaled beauty. That explains why pearls made such an intrinsic part of Greek weddings.
It weren’t just the fair maidens who wore pearl ornaments as a show of wealth, but also gallant knights who rode to battles carrying pearls as their charm with them. Pearl, in the Dark Ages, were believed to have magical powers to shield its owner from harm. In fact, pearl became such an undisputed symbol of power and wealth in the European countries that the commoners were forbidden from obtaining or owning pearls. None but the nobility could wear them.

Variety
While there is only one variety of natural pearl, the varieties of cultured pearls are many mostly determined by their provenance. The investment-quality pearls are found inside oysters in seas, are perfectly round and have a thick nacre. Categorically, pearls are of nine different varieties.
Natural pearls have no chosen place of origin. They occur everywhere and are extremely rare. Natural pearls are not necessarily round, but also occur in irregular shapes too. They occur in both fresh and saltwater. Natural pearl is found not just in oysters, but any species under the mollusk invertebrate genus.

The Japanese farmed pearls have sharp reflectivity and are perfectly round in shape. They are the ones used by Tiffany & Co and other high-end jewelers in their ornaments. Chinese Akoya pearls at the moment does not have the high luster, but they are improving, are perfectly round, all the same. The White South Sea and Golden South Sea pearls that are produced in Indonesia and Australia are similar to Japanese variety, with only one exception. These pearls are up to 20mm in size starting from 7mm. High grade pearls are also farmed in French Polynesia in the Black South Sea. They are a favorite of high-end jewelry stores because of their high reflectivity and great quality.