Pearl Education – Everything you need to know about Pearls

Pearls are gemstones which stand out from the rest. Unlike many jewels, they are organic, born from animals rather than the earth’s crust or mantle. They are also uncommon in that they can take months to a few years to form, as opposed to the millions of years stones such as diamonds or sapphires take. Rather than searching for naturally formed pieces, most pearls on the market originate from farms.

The opaque gems come in many colors, including white, off white, black and grey, with overtones of pink, purple, green and others. Possible shapes include round, near round, drop and baroque, while sizes range from two millimeters to thirteen and higher. Most pearls used in jewelry have nacre, which give them a distinctive iridescence. 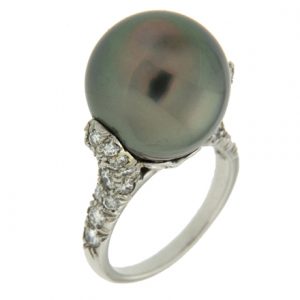 Pearls form within mollusks as a reaction to a foreign substance within its body. The animal tries to isolate the irritant by coating it in plates of aragonite, a type of crystalized calcium carbonate. Pieces of aragonite sit on top of one another in staggered layers akin to bricks. Conchiolin, a type of natural glue similar to material in human hair and nails, is the mortar that holds them together.

Ideally, enough aragonite forms to encase the foreign object. Its nacre, or aragonite-and-conchiolin coating, should be thick enough to be resistant to damage. While nacre can be deposited unevenly, uniform layers are preferred. Pearl farmers strive to provide optimal environments for their mollusks to produce quality nacre.

Properties
When light hits a pearl, it travels through the jewel’s nacre. The way aragonite is stacked causes light to bend around the plates. White light separates into its component colors, causing iridescence known as orient. Light which reflects from the nacre to the viewer’s eyes, referred to as luster, may be soft or mirror bright, depending on nacre quality. Mollusks which live in cooler water are more likely to deposit aragonite in a way that creates brighter pearls.

Pearl powder has been used in traditional medicine for centuries, is still used by people who prefer alternative treatments. The high amount of calcium in pearls may be the reason for its perceived health benefits. Pearl’s luminescence also leads it to be ground for use in cosmetics, in the hopes of brightening the skin.

Species
While any mollusk can create a pearl, only certain oysters and mussels can create nacreous pearls. The species used for culturing the gems range from freshwater to saltwater, and vary in the means used to form the jewels. These mollusks create different pearl types, varying in size and color.

Freshwater pearls form within members of the Unionidae mussel family. They live in both warm and cool climates, allowing for diversity of farm locations. The most popular Unionidae mussel for cultivation is the Hyriopsis cumingi, also known as the triangle shell. Though China holds the majority of freshwater pearl cultivators, producing over ten times more gems than other countries, the United States and Japan are also providers.

Major saltwater pearl mussel species include Pinctada fucata, Pinctada maxima, Pinctada magaritifera. These animals form akoya, South Sea and Tahitian pearls respectively. Pinctada fucata mussels are raised in Japan, China and Vietnam, and create white jewels between two and ten millimeters. South Sea pearls come from Pinctada maxima, which are cultivated primarily in Australia, Indonesia and the Philippines. Their gems are often ten to fifteen millimeters and are known for their golden and silvery colors. Pinctada magaritifera Tahitian pearl have a typical size of nine to eleven millimeters and are prized for their iridescent dark hues.

Cultivation
Pearl farm locations are carefully selected to be as close to the mussels’ natural habitat as possible. The water must be clean and rich in nutrients to help the mollusks thrive. The farm should also be in a location that protects the animals from storms and other severe weather, while allowing for the construction of nearby facilities. Mussels may originate from hatcheries or gathered from the wild.

Nucleation, the process that prompts cultured pearl creation, involves careful surgery. Skilled workers implant nuclei made from beads of other mussel species into the gonads of their mollusks, along with pieces of mantle tissue from donor animals. Some freshwater farms use only mantle tissue to form pearls in their mollusks. After implantation, the mussels are placed back in the water to coat their nuclei.

The number of nuclei a mollusk can accept at once, as well as the number of times it can be nucleated varies by species. Their pearl growth periods also differ. Freshwater mussels may accept up to forty nuclei at once, undergoing the process once or twice in their lifetimes. Their pearls may take as little as twenty-four months to take form, or as long as seventy-two.

The Pinctada genus of mollusks have similar nucleation and growth patterns, though they aren’t uniform. Pinctada fucata may accept up to five nuclei and have a gestation period of six to twenty four months. However, they can only be nucleated once. Pinctada maxima and Pinctada magaritifera both take one nucleus at a time and have a minimal pearl growth period of eighteen months, but that’s where their commonalities end. The former can be nucleated once or up to four times, and has a growth period of up to thirty six months. The latter is nucleated two to three times with a gestation period between eighteen and twenty four months.

Non-Nacreous Pearls
While pearls with nacre form the majority of the market, those of other species, referred to as “pearls” or calcareous concretions, occasionally appear on the market. These too from in reaction to a foreign body in the shell, and are made of calcium carbonate. However, the texture of the carbonate is coarser and leads to different interactions with light. Of these, melo and conch pearls are of special note.

Melo pearls come from the melo melo sea snail, which is found off the coast of Southeast Asia. The snail is gathered from the wild partly for its flesh, and partly for its shell, which is used for scoops or decorative purposes. Pearls are a rare bonus, not a primary objective. Melo concretions have an orangey or yellowish appearance, and shine with an iridescence known as flame structure. Pearls are large enough to be measured in centimeters, with the biggest found measuring 3.8 centimeters and weighing 397.52 carats.

Conch snails are also fished for their meat. The species known as the Queen conch is admired for its spiral shell, with a glossy interior which ranges from cream, yellow and pink. One out of every ten thousand queen conch has pearls, which often match the inner shell. Of the possible hues, pink is the most valued. Conch pearls too shine with flame structure, as well as a luster akin to moiré silk. 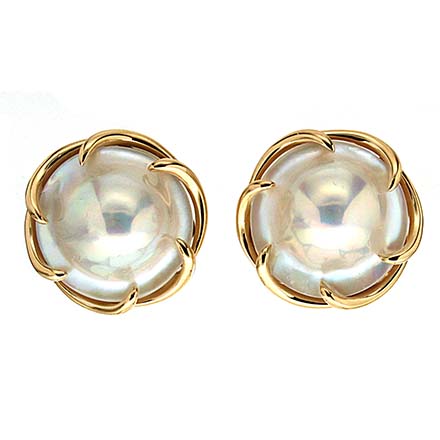 Unlike mineral gemstones, pearls use guidelines other than the 4Cs of cut, color, carat and clarity. Size, shape, color, luster, surface quality and nacre quality are traits all gem quality pearls are evaluated for. The seventh characteristic, matching, applies when there are two or more pears in a piece of jewelry.

Like with other gemstones, smaller pearls are more common than larger ones. If all other qualities are equal, bigger pearls would be in greater demand. The more time a mussel has to deposit nacre, the greater the chance a jewel has to increase in size. It also increases the likelihood of the pearl achieving an uneven form. The major designation for pearl shapes are Spherical, Symmetrical, Baroque and Fancy. Spherical jewels are the most sought after, though designers create inventive pieces from pearls of any type.

Pearl color consists of three traits, bodycolor, overtone, and orient. Bodycolor is the dominant hue, which is further categorized by Neutral, Near-Neutral and Hue, or fancy colors. Overtone is the transparent shades that sit upon the bodycolor, and orient is the iridescence upon or just beneath the surface of the jewel. These two qualities can highlight bodycolor, making a pearl even more desirable.

Luster refers to a pearl’s sheen. Rather than just reflecting off the jewel’s surface, light penetrates the upper layers of a pearl, giving the jewel a unique gleam. How light reflects from a pearl depends on the nacre’s translucence, thickness and the arrangement of its aragonite and conchiolin. Luster is graded from Excellent, Very Good, Good, Fair and Poor, with the ideal being a mirror like brightness.

Nacre quality is a measure of its thickness, transparency and the way its layering effects the jewel’s appearance. Thickness is desirable, adding to the gem’s durability and concealing its nucleus. How nacre deposits on the pearl impacts the way light reflects from the jewel. This in turn affects the nacre’s translucence and luster.

Pearl matching can vary depending on the designer’s taste. Those who want a uniform look aim to find pearls which are similar in size, shape, color, luster, surface quality and nacre quality. Matching is graded on a scale of Excellent, Very Good, Good and Fair, depending on how noticeable the difference is between gems. Others may wish to create jewelry with disparate pearls. In these instances, the goal is to find jewels which look harmonious together.