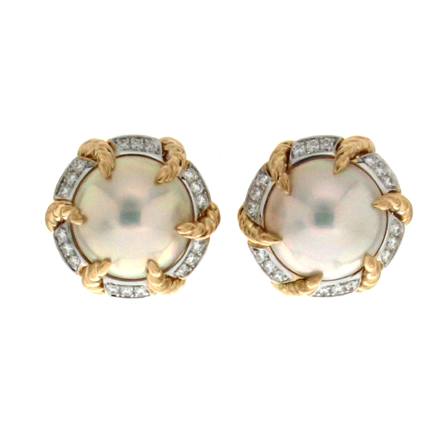 Collecting saltwater pearls has historically been a tricky task, with the desired mollusks living ten feet, or more often forty feet and deeper below sea level. Between the cold, limited air and other factors, a lot could go wrong for the divers. Regardless, the beauty of this gem sent countless people beneath the waves in regions as diverse as South America, Australia, India, the Persian Gulf and the Philippines.

Pearl diving still occurs today. In some places, like parts of Australia, the oysters used for culturing jewels are retrieved from the wild. In Japan, divers will demonstrate their skills to tourists, while other parts of the Pacific offers visitors the chance to swim for their own cultured pearls. Farmers also collect their gems in this fashion. Oxygen tanks and other dive equipment help reduce safety risks while making this underwater task simpler.

Mother of pearl was traditionally taken from the wild. Divers braved cold and other hazards to gather the gemstone. For marine nacre, this meant repeated trips ten feet or deeper below the surface. Freshwater mother of pearl formed in shallower waters.

As with pearls, much of today’s nacre are cultivated on farms. Pinctada mussels are raised in the south Pacific as well the Indian Ocean. China is a leader in cultivating freshwater pearl oysters. Abalone rearing countries include Japan, China and Korea, and others as diverse as Namibia and Iceland.

Depending on the species, overfishing may be a concern. Farmed mother of pearl helps take pressure off of wild stock. The Convention on International Trade in Endangered Species of Wild Fauna and Flora, or CITES, regulates the import and export of nacre. Depending on the country, a special permit may be necessary for distribution.

Researchers at the University of Cambridge and McGill University have developed different types of artificial nacre. Cambridge dipped glass into two types of organic compounds before crystallizing the results. McGill used lasers to etch microscopic cracks onto glass, which behaved similar to nacre.

Both experiments hope to give mother of pearl’s toughness to a variety of objects, from smartphones to light armor.