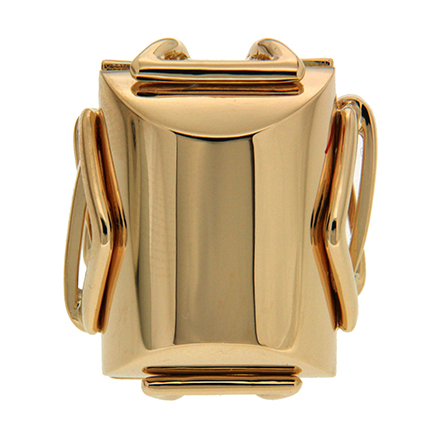 While jewelry can be made of string, plastic, wood, glass and other items, they’re closely associated with precious metals. These metals have many qualities which make them ideal to work with, including beauty and ease of shaping. Several materials qualify as precious metal, including gold, silver, palladium and platinum. Of these, gold and platinum are quite popular for fine jewelry.

Gold and platinum have a lot in common. Both metals are naturally occurring elements and sit next to each other on the periodic table. Both appear in alluvial deposits, washed from their sources and mixed into sediment. While purity is valued, these metals are often alloyed with other materials to increase their durability.

Noble vs. Precious Metal
Platinum and gold have properties which make them both noble and precious metals. The former term refers to elements which have strong resistance to corrosion and oxidation in damp air. This durability makes them a good match for jewelry, as they can be worn on rainy days, in a bath and other environments without the risk of damage.

Precious metals refer to rare natural materials. Most have high ductility, which allows them to be stretched into wires without breaking. Gold and platinum are also quite malleable, withstanding strong levels of compressive stress. This allows for stamping, hammering and other work that goes into creating jewelry.

Platinum
Platinum is a light-colored metal that gets its name from the Spanish “platina,” meaning “little silver.” It’s far more ductile than gold or silver, allowing for fine wires and lacy jewelry. As a noble metal, it’s resistant to corrosion, though vulnerable to chlorine. On the periodic table, it’s number 78.

The first people to work with platinum were the La Tolita culture, who lived around 200 BCE along the present-day borders of Colombia and Ecuador. While at least one artifact was hammered from a nugget, other pieces are believed to be made from tiny grains of platinum interspersed with gold dust. The gold acted as a solder, binding the white metal without interfering with its color.

Platinum has an extremely high melting point of 1768.3 Celsius, or ​3214.9 Fahrenheit. Later people, like 17th century Europeans, were mystified as to how to shape the metal. During the 1780s, Pierre-François Chabaneau experimented with refining platinum, making it easier to work with. His discoveries lead to a “platinum age” in Spain.

During the Edwardian era, delicate openwork jewelry was in high demand. Platinum was the metal of choice, thanks to the recent invention of the oxyacetylene torch which allowed for temperatures high enough for the metal. Its resistance to tarnish ensured the jewelry didn’t discolor, and its ductility allowed for the laciest of designs.

Pure platinum is soft. To give it the hardness needed to withstand wear as jewelry, it’s alloyed with other materials. Various blends give different results, making them suitable for different types of jewelry manufacture. Platinum and ruthenium are suited for high volume creations, while platinum and palladium are favored by chain makers. Cobalt-platinum alloys are popular in Europe, while iridium and platinum is more common in the US.

Gold
Gold is a deep yellow metal that’s number 79 on the periodic table. Its malleability is unrivaled. Not only can a single gram be hammered into a square meter, it can be beaten until semi-transparent. As a noble metal, it’s resistant to most chemical reactions.

References to gold may involve “karat,” or purity. The term originates from a Byzantine coin which was divided into twenty-four units, known as keratia. To this day, pure gold is known as 24 karat. Other levels of purity are named as parts of 24, such as 22/24 or 22 karat. Another way to express gold purity is parts out of 1000, such as 800/1000. Karat remains the more popular measurement.

Colored Gold
While 24 karat gold is technically wearable as jewelry, its softness makes it vulnerable to damage. To increase durability, it’s alloyed with other materials. Fourteen karat, or 58.33–62.50% and 18 karat, or 75%, are common ratios. Depending on the other metals used, gold remains yellow or takes on another hue.

White gold is an alloy which resembles silver or platinum. Its light coloring is achieved through various ingredients, such as nickel palladium or manganese. Copper is sometimes included, and may be paired with zinc to tone down copper’s hue. Modern white gold is often made nickel free to accommodate those with skin sensitivities.

Rose gold, also known as red or pink gold, gets its hues from copper. The exact shade may vary depending on the formula. Silver is sometimes added to give the gold a stronger pink tone, while zinc plays up the yellow hues in the blend.

When gold and silver mix, they create a greenish yellow. This combination occurs naturally as well as in the workshop. Green gold has been known as far back as 860 BCE, when the Lydians of Anatolia called it electrum. Early green gold was used for currency as well as jewelry.

Other forms of colored gold include purple, blue and black. Purple is achieved through blending gold and aluminum. This mixture is quite brittle and rarely used in jewelry. Blue gold may be formed through alloying gold with gallium or indium. Other means include blending specific amounts of gold, iron and nickel and oxidizing the material under controlled conditions.

Gold can blacken through a variety of surface treatments. One means involves applying a patina, while another uses chemical vapor deposition to change the metal’s color. Electroplating using black rhodium or ruthenium another option. A fourth method involves oxidizing an alloy of gold, cobalt or chromium.

Colored gold, particularly white and rose, enjoyed a heyday during the mid-20th century. The availability of precious metal dropped, and platinum reserved for military use. To help stretch existing gold stocks, it was blended with copper and other metals to create colored gold. Designers played with these hues, often combining more than one hue in the same piece. Even today, multicolored gold rings appear on the market.