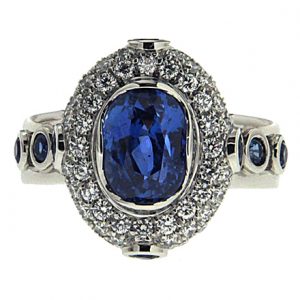 The word sapphire comes from sapphirus, a Latin word. It is also said to have its origin a Greek word sappheiros, and a Hebrew word sappir. Some linguists have even said that it comes from a Sanskrit word called shanipriya. The word shani means Saturn and priya means dear. Thus, the word shanipriya means dear to Saturn. Once upon a time it used to be one among the 12 precious stones that had been placed on the breastplate used by the High Priest of Israel. The Greek word from which sapphire is said to have derived was actually used to describe lapis lazuli. In medieval era blue corundum crystals came to be known as sapphire by lapidaries in Europe.

The blue gemstone is traditionally gifted on the 45th anniversary and is also regarded as the birthstone of September. The gemstone normally represents values such as nobility, sincerity, truth and faithfulness. It has been associated with members of royalty and clergy for ages. Its color is so exceptional that it has now become a standard against which blue gems such as tanzanite and topaz are measured. It has also been associated to romance and royalty for centuries. In 1981 Prince Charles had given a blue sapphire ring to Lady Diana Spencer when they got engaged.

Beauty of sapphire
In earlier ages it was thought that the sky was a huge sapphire on which the earth had been embedded. There is perhaps no image that describes the beauty of this gemstone so well. There is perhaps nothing in the world that can match a perfect sapphire in terms of physical beauty. Going back to that reference of sky, sapphire comes in all shades of that sky, as seen in different parts of the story. It can be as deep blue as the evening sky or as shining blue as we see during a clear summer day.
It also comes in several other colors. It can be grayish-blue like the horizon that always seems so distant from us or it can even be yellow, orange, pink, and purple. They can truly be regarded as the gems of the sky above us. Blue is the main color that sapphire is available in and almost 50% of the people in the world like this color as their favourite one. Blue is the color associated with feelings such as sympathy, friendship, harmony, and loyalty – qualities that sapphire itself is associated with as well.  These are basically feelings that are proven over the longer term. Similarly, sapphire is also one for the ages. These are emotions where passion is not always dominantly evident. Rather, things like composure, calmness, absolute trust, and mutual understanding are the main components over here. This is the reason why when you want something reliable and consistent you go for sapphire blue. This is also the reason perhaps for sapphire being used as a present on one’s 45th anniversary. It is also definitely one major reason as to why women around the world want to be gifted a sapphire on their engagement by their prospective beaus. 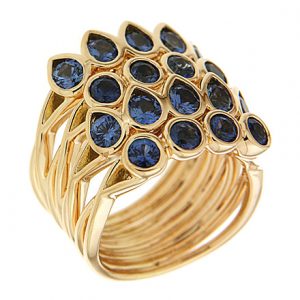 Blue sapphires are normally judged on the basis of how pure their primary hues are. In case of blue sapphires, green, violet, and purple are the commonest secondary hues. Purple and violet normally enhance the beauty of a blue sapphire. Green is however regarded as specifically negative for a blue sapphire. Blue sapphires, where purple or violet comprises 15% of the color scheme, are normally supposed to be of the best quality. In case, green is discovered as the secondary hue, it is regarded as anything but of positive quality. In cases where gray is found in these sapphires it acts as a mask in the sense that it reduces the brightness and saturation of the sapphire’s hue. This is why it is regarded as negative as well.
Blue sapphires that are fine blue normally have a highly-medium dark violet hue or purplish tinge of blue. In this case, blue hue, which is the primary color, makes up 85% of the color. The secondary hue makes up less than 15% of the color. In such sapphires there is no trace of gray mask or green as a secondary hue. A sapphire named Logan is regarded as the finest specimen of this species. It weighs 423 carat and is kept at the National Museum of Natural History in Washington DC.