Ruby, the Biblical Stone of Power and Passion 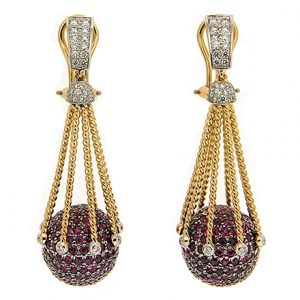 Rubies have made recurrent appearances in gold ornaments through centuries. Though known to most people as the blood-red gemstone, rubies do have other varieties that are more mildly colored. Ruby gets its red tinge from chromium that amounts of which control the color scale of the stone. The name ruby is a derivative of the Latin term “ruber” which means “red”. Ruby is one among the four precious gemstones, others being emerald, diamond and sapphire. Ruby is graded on the values of 3Cs- color, clarity and cut. The pricing of the stone however involves the fourth factor, the carat weight, but it is not a constant for grading.

Like the other three gemstones, the history of rubies is also thickened with myths and lores. The gemstone occurs four times in the Biblical text, and in each time, it has been associated with the attributes of wisdom and beauty. That explains the stone’s astrological association with desire and power. The name Ruby is also mentioned in ancient Sanskrit scripture where it is referred to as “ratnaraj”, meaning the “king of precious stones”. It was believed in ancient Hindu culture that rubies offered to Lord Krishna were returned to his disciples as reincarnations as emperors. Possession of rubies in Hindu society was considered an advantage of safety.

Variety
Rubies mined in different parts of the world are visibly different from one another, and while there is no other variety of ruby than pink sapphire, the stones are classified depending on their places of origin and visual nuances. The most popular of them are:

Burmese rubies: The Burmese ruby mines have some of the world’s finest and most superior pieces. They feature a fierce red shade which is the pigeon-blood red variety.
Thai rubies: Thai rubies make a close finish with dark undertones due to high content of iron mixed with chromium.
Vietnamese rubies: These rubies are as superior as Burmese rubies because of geographical locality.
Madagascar rubies: The rubies mined in Madagascar are cosmetically identical to their Burmese cousins, but only after a little heat treatment.
Grade-A rubies are also mined in Afghanistan, Tanzania and Sri Lanka.

Beauty
The most valuable grade of ruby features a pigeon blood red color. Clarity of the stone is the next in line that commands the pricing. A clear ruby does cost more than those with inclusions, but exceptional treatment is made to rutile inclusions. The absence of those natural needle-like scars indicate that the ruby has been cosmetically treated. Rubies, garnets and pink sapphires may look alike in some cases, but it must be remembered that rubies are pinkish and not exactly as dark as garnets. Grading standards in some countries require the stone to meet the color saturation standard. If a ruby is anything lesser than the set value, then it is categorized as pink sapphire. There are finer debatable points on the differences between rubies and pink sapphires and is a relatedly new contradiction. Pigeon Blood Ruby is the most expensive ruby in the world which is also the most expensive among all gemstones except for a diamond.