Paint It Green with Emeralds

The popularity of emerald as a gemstone is unmatched among the likes of rubies and sapphires. Though diamond continues to hold on to the title of ‘crown jewel’, the use of emerald in fashion jewelry is on the rise. Designers predict that the age of emerald and other value gemstones will soon commence and that will set the present trend topsy-turvy for good. Chemically, emerald contains chromium and vanadium in trace quantities and that lends the ethereal green hue to the formation. The measure of chromium present in the stone gives it colors between yellow to green. 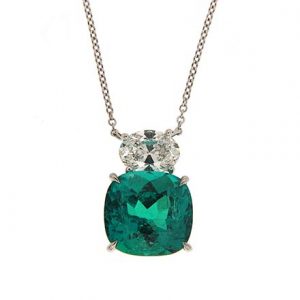 It is factually unknown where emerald was first unearthed, but the term came from ancient Greek vocabulary. The etymological term for emerald is smaragdos meaning “green gem”. While much fact beyond the beryl family seems irrecoverable, there are some lore that throw some light on the mythical background of emerald. Some say that emerald was one among the four gemstones that God gifted to the biblical monarch King Solomon. Going by the story, emerald was one of the stones of creation. While the legitimacy of that theory remains highly debatable, it will be more agreeable to say that green being the color of new growth or the season of spring, the association is allegorically in place.

Roughly, emerald has been categorized by their provenances. The most known and sold varieties are Columbian, African and Brazilian emeralds. Columbia fronts the world in the production of emerald. The stones mined bear a darker shade of green and greater opacity. African emeralds bear a secondary gray color that largely influences the depth of green. The stones are a more luminescent shade of green because of the presence of brown or gray. Brazilian emerald green is more inclined to the yellowish lighter tinge.

The beauty of emerald sways between mild to enhanced depending on two factors, color and clarity. An emerald can occur in two hues, viz., yellow-green or blue-green. Now having said that, an emerald stone will never fully appear to be neither yellow, nor green. Green is the primary shade tone that gives the stone its inherent color, while yellow and blue are the secondary shades that play with the saturation and the tone. Interestingly, only stones that are dark green in color are labeled and sold as emeralds. Those that bear a light tone of green are sequestered and marketed as green beryl.

Emerald barely has the clarity matching diamonds. Due to the presence of measurable inclusions such as fissures, the stone is examined by naked eye for grading. So, if a stone shows no inclusion to the bare eyes, then it is graded “flawless”. Flawless emeralds are very rare and are thereby priced loftily. The rest of the stones undergo extensive polish and clarity enhancement treatments. Stones that have a vivid green primary hue that reserves 85% of the color are priced the highest. These eye-clean stones are assigned to decorate signature jewelriesonly while the rest are used up for pieces of lower grades.